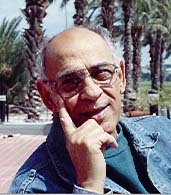 Anyone who reads Sami Michael (mee-kah-el), the Iraqi-born Israeli author, knows he writes beautifully. In his stories, he has been able to bridge between Arabs and Jews in a singular way. This year he was awarded the Israel President’s lifetime achievement award. In the past he has won the Wolf prize and has been a finalist for a Booker Prize. His 11 novels have touched not only Jewish readers, but many non-Jewish readers, including Arabs and Palestinians. Recently, Ahmed Harb, a well-known Palestinian writer flattered a very moved Michael by nominating him for a Nobel in Literature.

I’m writing all of this to say that he writes a beautiful memoir in today’s Ha’aretz. If there is anything worth saying about Michael’s writing, is that whatever he writes, it flows mellifluously like water streaming down a calm river. It’s well worth a couple minutes of your time.

Here’s a bit from the Ha’aretz article:

I lived at the kibbutz with the status of a hired hand, and I worked as a technician in the Hydrological Service. This work was a gift from heaven for me. At times of psychological distress or existential crisis I find consolation in manual work. With a hammer, pliers or saw in hand I go off then to repair a table, a bookcase or a rusty pipe instead of repairing the world. The Hydrological Service was a kind of occupational therapy. In the isolated streams and in the dangerous floods, I would find myself again. I made friends with clear-thinking men who were devoted to a profession that demanded ingenuity, a strong conscience and natural intelligence.

The work was carried out in expanses empty of people, mostly near the dangerous border. It is a commonplace that work in the bosom of nature is a tranquil, romantic experience – but it is not. Dangerous pesticides, tension, heavy smoking, exposure to freezing cold and driving through the dust in the summer all exacted their price. The majority never made it to retirement age, but was proud of its work despite the miserable salary, which was below that of a construction worker.

I admired those tough men and appreciated the strong solidarity that flourished in their company, even though they were capable of mercilessly crushing smooth-tongued egotistical types. I forgot my troubles in the pleasure of doing and I wanted to express my appreciation for this breed of men I had not previously known. Before that I had been involved with great heroes, from the moderate left to the extreme left. I had known friends who were imprisoned and taken to the gallows. They withstood social ostracism and reacted scornfully to humiliations. That was courage of a different sort.

By the way, in doing a little research for this post, I came across this wonderful blog: Point of no return: Information and links about the Middle East’s forgotten Jewish refugees.