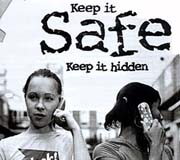 Sorry for the misleading title, but it seems to Muffti that mentioning the word ‘Mobius’ these days will get a story as much attention as calling it ‘Sexy Li’l Dolls Stripping and Showing Gratuitous Boobies’. And he wants to save the latter for when he really needs a post to get attention.

This is really just an update on the last post.

Ha’aretz reports that Kofi Anan pronounced from the UN throne that Israel, should let Hamas run in the elections. However, as a compromise: (not a quote from Anan)

…it was important that no armed militia sit in the Palestinian parliament. He also said that the demand that Hamas disarm itself before the general elections would only strengthen the radical Islamic group on the account of other moderate movements.

Muffti noted an ambiguity he wouldn’t mind having explained: by ‘armed militia’, does he mean member of a militia which is armed, or armed member of a militia? One would think, at least, that the latter was a pretty minimal demand: Muffti supposes that, unless one is in Texas, carrying arms into the parliament building is a no-no. One would have to see a vote of non-confidence in those circumstances! On the ther hand, the other interpretation seems to lead Kofi into contradiction: we shouldn’t disarm Hamas, we should let them run and we should also not allow members of an armed party to sit in parliament. Muffti realized the following: those are only consistent on the assumption that Hamas win nothing at all in the election. The only other option is to think that Hamas should be disarmed after the election. But, jeez, what are the chances of that? They get political representation and THEN say ‘oh wow! such power! Let’s disarm!’

One positive development is that 12 Palestinian factions signed an agreement to abide by the election results AND agreed to not carry weapons while they were campaigning. Hamas was not a signatory to the agreement (though Muffti doesn’t know the relevant circumstances: you know, like if they were asked). According the the radio station, Voice of Palestine, leader Mahmoud Zahar, objected to a clause in the agreement banning campaigning in mosques.

To make matters even stranger, word is that PA forces have been gathering around command centres, fearing ‘an attack by Hamas’. This truly boggles Muffti’s li’l mind: the PA demand that Israel not interefere with Hamas’ participation in the election. They announce that they will not disarm Hamas, but they get the military to take up key positions in Gaza out of fear of attack by Hamas?