Been Caught Shticking/You can Lead Jews to Perry Farrell, But You Can’t Make Them Cheer… 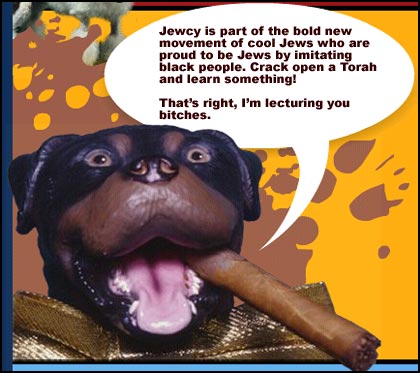 You’ve waited long enough…here it is, the “he said, she said” recap of Sunday night’s Jewcy event that benefited Natan.

The “he” is Muffti, and the “she” is me. I mean, I am she. Whatever–it’s me, Esther. Muffti will go first, and I will comment in italics, as I am wont to do. Read on, dear friends. Enjoy!

GM: Jewcy’s Channukah Party looked good on paper. Former Jane’s Addiction front man Perry Farrell was going to DJ. Comedienne Rachel Dratch was set to perform. Princess Superstar was going to lay down some rhymes. Triumph the insult dog was going to insult everyone. Most of all, Esther and the Grand Muffti were representing Jewlicious in the VIP [big shout-out to Jewcy for providing the VIP tickets].

EDK: Geez, only one paragraph in and you know that Muffti’s posting a negative review. You don’t see me complaining that I missed talking with Rachel Dratch before the show because Muffti called me on the phone, causing me to give up my chance at becoming one Poehler short of having met the top three leading ladies of SNLâ€¦But after realizing that the VIP area was featuring an open bar, an endless supply of kosher stellar sushi, and a meat carving bar (Muffti and I don’t get to share hunks of kosher meat together often) at least my heart was softened by the VIP treatmentâ€”my biggest regret (aside from the Dratch miss) was not having brought Tupperware.

GM: Of course, as we all know (unless you are a philosopher), what looks good on paper doesn’t always translate well in practice. In Jewcy’s case, that turns out to be half true. So far, Muffti’s On Paper vs. Reality scoreboard is 4, reality 0. Let’s see how reality fared as the evening unfolded.

EDK: And I think that it’s worth noting at this point that Muffti had never been to Crobar for a Jew-Do, whereas I had thrice before (at last count), The place is huge, and the main concert area (and sound system IMHO) is not designed for a comedy show. I was actually kind of shocked to learn that the venue for this event was Crobar, and even more shocked to learn that there’d be general admission with no seats available. But Muffti’ll doubtless cover that territory laterâ€¦

GM: But first let us talk about the things you really want to know about: Muffti showed up with his jersey crew, including Sam, Jessica and Manwhore Jonathon. After getting his press pass (leaving his friends behind for free drinks, sushi and other delectables in the VIP) Muffti met up with Esther and, well, started drinking. In the process Muffti and Esther ran into a host of interesting characters, including EV of Jewschool, Gabi from the Jewish Week, a cute NY Times reporter who wanted nothing to do with us [who actually was very nice to Esther, probably at least out of social courtesy], Naomi Less from the band Less Nessman [playing live at Makor on Thursday 12/22] and others. All in all an excellent time was had, though Muffti had to restrain himself a little because he is, well, trying to become a professor. Or something like that.

EDK: Not that he was at all professorial. At least he looked like no professor I ever had at Rutgers. Did I mention his pecs? But I digress. And seriously, if you’re in the know in the NY Jewish community, the VIP room was the place to be. I recognized many luminaries–heads of established and up-and-coming organizations– whose names would not even remotely impact Muffti, but whose presence I found invigorating. Present were representatives from various grantmaking organizations including the Steinhardt Foundation and the Schusterman Foundation, founder of Hazon Nigel Savage, one of my colleagues from the Jewish Week, and Naomi, who leads a double life as rock goddess/Jewish camping professional. These are people who are committed to Jewish life and culture, and I found that a little bit thrilling.

GM: Back to the show. Perry Farrell started things up by being weird. Very weird. He ‘DJ’ed a few songs, throwing in the occasional eye raising comment such as ‘You are modern Jews? I’m very impressed’ and ‘I’m 43 but *I* still want a bike for hannukah’…he later came back and performed a rousing rendition of Aveenu Malkainu, followed by ‘Jane Says’, a lovely ditty about Jane and her pimp Scorpio.

EDK: DJ Peretz, as he’s known at these Jew-Dos, actually began the evening’s spinning with â€œTake a Walk on the Wild Side,â€ which most of the Jews in attendance were actually doing merely by going out on a Sunday night and walking almost as far west as you can without ending up in the Hudson River. Peretz then segued (if you can call it a segue when songs have no common thematic elements) into “Strange Magic” with the following intro: â€œIntroducing the â€˜strange magic’ that is Judaism.â€ And then I lost track of the dude.

GM: So, Perry, in Muffti’s estimation was a little disappointing (sorry, y’all, but the man used to sing for Jane’s mother-fucking addiction! Muffti had high standards!). Rachel Dratch, however, was worse. She
meandered her way through a ‘pick on jewish stereotypes’ poem that mercifully only lasted 10 minutes. So, the score so far is on paper 5, reality 0.

EDK: Mr. Muffti Pottymouthâ€¦not only do I disagree with this scoring system, but Dratch’s performance wasn’t anywhere near 10 minutes. And I feel for Rachey, because she’s got Jack Black hosting SNL this Sat night, and I’m sure he’s running everyone ragged with his manic anticsâ€¦maybe she didn’t have time for a better poem. It wasn’t the worst I’ve ever heard, but that didn’t mean it was great. Muffti also totally ignored Todd Barry, who is really funny and worked the NY material in his standup, tossing in a few concretely Jewish observations as well. He didn’t get nearly enough respect for pointing out that to get to the club, you â€œget off the subway, and walk until you’re scaredâ€¦and sure you’ll be killed,â€ or for noting that he saw a guy with a pink watermelon yarmulke: â€œIf God’s okay with the pink watermelon yarmulke, He’s probably okay with no yarmulke.â€

GM: However, one of the surprises of the night was Northern State. Those girls, we all agreed kicked ass. Muffti tried to co-opt EV into hitting on them at the end of the evening but they were busy 🙁 They were good. So, score 1 for reality! (OP: 5, R: 1).

EDK: So typical–put cute girls on stage and the boys go wild. During the performance, all of us agreed that although they had the posturing of rappers down, complete with the small jumps a la House of Pain (or Kriss Kross, if you’re old school), wherein they kept their centers of gravity low, we also agreed that they didn’t have the best, strongest sound. When you consider that women and Jews have a clear rap disadvantage in terms of establishing cred, they were pretty good. Except for one guy in the front row with too much hair product who was clearly related to someone in the band, EV said the crowd was â€œplacidâ€â€¦I heard â€œflaccid.â€ We agreed both were true. Of course, nothing stops a Muffti on the move.

GM: Princess Superstar had a short set, but she rocked. The girl is a hottie and very good at what she does. Muffti wish she had played for longer but it was good to catch even a brief show. So, OP: 5, R:2.

EDK: Plus, we were drinking through most of this set. Witness the following dialogue (reconstructed):

Me: Don’t you like Princess Superstar? Shouldn’t we leave the VIP Room and see her perform a little?
Muffti: oh, come on, have some vodka.

GM: The highlight of the night, however, was Triumph the Insult Comic Dog. While Muffti was ready to dislike the li’l mutt for making fun of french quebecers (get quote– NO, Muffti…YOU get the quote…However, Triumph rocked the house. That dawg is a riot.

EDK: And I even wrote down some of the jokes (for us all to poop on):
“The last time Todd Barry was involved with a Jewish event was when Sarah Silverman gave him a hand jobâ€¦â€
â€œRachel Dratchâ€¦you just want to give her a hug and pretend that her show doesn’t suckâ€¦â€
â€œThis event is a benefit for Natanâ€¦I read their website: it’s a group of Jewish philanthropists. I thought we already had a group of Jewish philanthropists: they’re called â€˜rich parents.’â€
â€œJewcy is part of the bold new movement of cool Jews who are proud to be Jews by imitating black people. Crack open a Torah and learn something! That’s right, I’m lecturing you bitches.â€

GM: And afterwards we met the man with his hand up the dog (see picture) and he blinked, sorta winced in pic and then went off with the hot NY Times grrl. Anyhow, OP: 5, R: 3. In my book that makes Jewcy a winner!

EDK: What? Esther and the Muffti agree? (Dogs and cats…living togetherâ€¦mass hysteriaâ€¦) Seriously, once you get past the weirdness of a small puppet headlining a show at Crobar, you can revel in the Smigelicious genius. Oh, and btw, looking at that pic of us, it occurs to me that RS looks like every fourth guy on JDate. Not a bad thing, just an observation.

GM: …but for all that, it makes the crowd a bunch of losers. For the most part they sat on the floor (prompting the shikse and shegetz to ask ‘why do jews sit on the floor? Is it a religious thing?). Oh well. As
the title said, you can lead some jews to fun…

EDK: Muffti, you can tell your non-Jewish friends (who the Jewishly named Sam and the Shakespeareanly Judaized named Jessica) that Jews sit on the floor:
a) in commemoration of the destruction of the Temple
b) in support of / in opposition to the disengagement
c) because they’re tired, it’s been a long weekend, tonight’s a school night, and they shlepped all the way west for a show and what do they find? No seatsâ€¦what, they expect me to stand for this whole fakockta event, no way, my feet are killing me.

Did you guys all really read to the end? We’re touched, truly we are. Or at least my eye’s sportin’ a tear…were you there? Did you enjoy it? Tell us about it…