If I forget thee, O Fink’s… 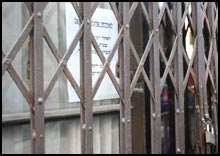 Every time I look at the cleaned out shell of what used to be the best, tiniest, you-would-never-know-it-was-there, hidden in plain sight, hole in the wall, historic, more stories than Hollywood could dream up, bar which is now turning into yet another Jerusalem bakery (because what the world needs now is more sufganiot), I just want to cry.

With no fanfare and no public outcry, Fink’s has closed. For those who don’t know Fink’s was a long standing Jerusalem institution. Located on HaHistadrut street for over 70 years it was the oldest and most historic bar/restaurant in West Jerusalem. Accommodating exactly 5 tables, it was quaint but commanded a grace and gravitas usually reserved for old world European establishments.

Even in a city as over-saturated with the history as Jerusalem, Fink’s had a quiet authenticity that much of the city-turned living museum has lost. There was no plaque announcing it’s famousness. Tourist groups didn’t stop there. Even many locals never knew what was there behind a non-descript brown door.

But even closed, it’s memory will continue to enchant me. During the War of Independence, it was the place where British soldiers drank while plotting against the Lehi who were sitting at the next table plotting against the British while the waiter was secretly a part of the Hagana, and the bar tender was part of the Irgun. Secrets flying, messages being covertly delivered, Plans being hatched that would ultimately lead to the creation of the Jewish State. It’s a screen writer’s wet dream.

Politcal drama continued for decades, including the legendary incident of Fink’s refusing to seat Henry Kissinger in 1975 saying that the regular customers occupying the restaurant were more important than Kissinger and his request to have the place emptied out for his entourage.

It continued to serve diplomats, politicians, journalists and local Jerusalemites until it suddenly closed recently. Harry, who knows things, tells me that the owner simply refused offers to buy it. Rumor also has it that the Israel Museum requested the whole establishment be transferred as is into its custody. But then, maybe the bakery gave them an offer they couldn’t refuse. Like free rugalach for life. Who knows.

Part of Fink’s mystique was that there was never much written about it, and certainly not much available online. Nonetheless, you can read a great article on Fink’s legendary waiter Yitzhak Burg here.

In any case, goodbye Fink’s. It’s a lonelier town without you. What are we going to do for intrigue now??