Muffti isn’t Sure Whether This is Funny or Sad

Check out this hottie: 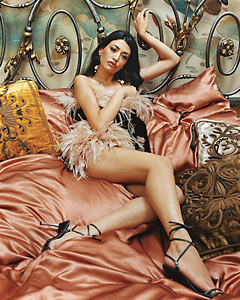 The woman, Wafah Dufour, has a rather infamous extended family, her father being the half-brother of Al-Quaida Head Honcho Osama Bin Laden. Wafah, a Californian born, American-Values-embracing budding pop star, is currently enjoying a career as a pop-star. The picture above in from the December issue of GQ.

Come on, where’s the American spirit? Accept me. I want to be embraced, because my values are like yours. And I’m here. I’m not hiding.

Wafah has, not suprisingly, encountered the occasional question regarding her family tree.

It’s really tough that I have to always explain myself…It’s like every time I meet someone, I have to move a huge mountain that’s in front of me, and sometimes I get tired.

Muffti isn’t sure, as he said in the lead, whether to laugh at the irony or cry at the implications. Or both. Or neither. Next time Islamicists say they are fighting the spread of american culture, remember the pic.

Anyhow, if you think this is all a little too sexy, here’s a quick quote from the online mini version of the GQ story:

The face is alluring (big dark eyes, long lashes, plump lips, caramel skin), but she looks wounded. And there’s something else. At ï¬rst I can’t quite ï¬gure it out, but then it hits me: She looks a little like her uncle, albeit a waify ninety-eight-pound tiny-footed version. Sexy Osama!

*shudder* Muffti isn’t sure that the visual association made Osama sexier in the mind of the inteviewer, or Wafah less sexy…

And on that note, Shabbat Shalom all y’all. And a happy Hannuka. With no Christmas music.