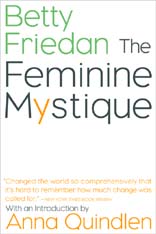 “The problem that has no name â€” which is simply the fact that American women are kept from growing to their full human capacities â€” is taking a far greater toll on the physical and mental health of our country than any known disease.” – Betty Friedan

Betty Friedan, author of The Feminine Mystique, The Second Stage and the Fountain of Age died today at age 85.

She played an instrumental role in the early feminist movement in America. At her 15th reunion for Smith College, while employed as a freelance magazine journalist, Friedan distributed a survey to the graduates who were nearly all housewives. Overwhelmingly, the response from the graduates was one of ennui and a feeling of ‘is that all’? Friedan prepared the piece for publication and was squarely rejected from every magazine she submitted it to.

Like any good academic, not wanting to waste work done, she expanded the research into a full book, The Feminine Mystique. The book tapped into a source of female frustration with playing the role of housewife and resonated with many: why should anyone expect that women, who have different life experiences, different interests, different talents, would all (or even mostly) find fulfilment playing exactly the same role as one another? Despite how ridiculous this may look now, fulfillment in motherhood and housewivery was exactly what post WWII society expected of women. Friedan provided a voice to the women who didn’t find such fulfilment.

Of course, as any movement develops, its founders become targets of internal criticism. Lesbians, black women, communists, for example, found no voice in writings of the heterosexual, middle class white woman’s book. Nonetheless,. Friedan went on to be a co-founder of NOW (and its first president) and, by all accounts, was instrumental in rallying women towards a cause that is now the full blooded movement known as feminism. She rallied in the 70s for abortion rights and for the ERA.

Later work focussed on the status of the Women’s movement in the 80s and her final book dealt with the identity and pscyhology of the elderly. She has taught at numerous institutions (including NYU and USC) and promoted the rights of women everywhere. Zichrona Le’bracha. Muffti has no doubt that if there is a heaven that contains inequalities, Betty will waste no time getting to work on straightening things out.