Jewlicious @n The Beach.2 – Off the hook 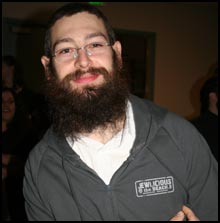 I have so much to write and so many photos to put up but apparently I am leading a session on blogging – what the hell do I know from blogging? Anyhow, I am going to have to dash but for now enjoy this photo of Matisyahu in a Jewlicious hoodie. Pretty sweet, huh? He spent shabat and Sunday with us. He’s totally chill. I know… this post is pretty lame. I’ll do better later. Maybe.

And we’re not talking about just any baby here – this is Laivy Yitzhak – or as we like to call him MiniYahu*, Matisyahu’s infant son. Isn’t he cute? He’s been having an awesome time chillin out with the Jews at Jewlicious @ the Beach.2. Now this has turned into quite the post? Eh? What do you say now Esther, Miss big shot New York writer chick. What do you have to say now?

*The name MiniYahu was coined by Laya. Just so you know.