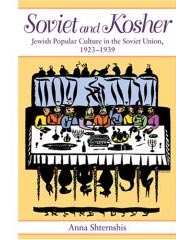 Their plan was to create a new Jewish culture – a transformation that disassociated Jewishness from Judaism. They published magazines like The Apikoyros that were dismissive and critical of traditional Judaism, they printed and distributed a parody of the Passover Haggadah, they chanted “We don’t need priests and rabbis!” and “Down with the rabbi and his whip” and had torch lit protests and celebratory dinners on Yom Kippur. They also often had fist fights with Zionists. These guys were hard core!

Super radical Jewish Lower East Side Hipsters? Nope. Those guys are just a pale imitation of Soviet Jews between the years 1923 and 1939. Anna Shternshis in her newly published book Soviet And Kosher: Jewish Popular Culture in the Soviet Union, 1923-1939 discusses an era that has many parallels with our own.

Anna Shternshis’s fascinating study traces the creation of a Soviet Jewish identity that disassociated Jewishness from Judaism. The cultural transformation of Soviet Jews between 1917 and 1941 was one of the most ambitious experiments in social engineering of the past century. During this period, Russian Jews went from relative isolation to being highly integrated into the new Soviet culture and society, while retaining a strong ethnic and cultural identity.

Shternshis does us all a great service in bringing this era to light given that between the Nazis, Stalin and assimilation, very little of what these old school soviet yid hipsters did, remains. Hmmm….

And y’all thought you were soooo modern.