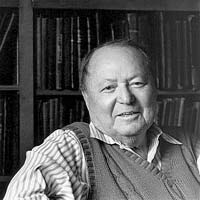 Talk about a man who was a true “Middle,” who managed to get everybody from each end of the spectrum and the center to both listen and be responsive to his ideas (often negatively); Rabbi Arthur Hertzberg is gone. There is no question that he was an influential man in American Jewish life and to a large degree, outside of it. Here is a fine obit in the NY Times (registration is free).

Rabbi Hertzberg seemed to savor taking on partisans from opposite sides of the same issue. After Israel’s victory in the Six-Day War of 1967, for example, he rankled many Jews by proposing the creation of a Palestinian state. Yet when the Rev. Daniel J. Berrigan, the Jesuit antiwar activist, accused Israel of “militarism” and “domestic repressions” of Palestinians, saying they echoed those of the Nazis, Rabbi Hertzberg condemned him for “simplistic moralizing.”

“Let us call this by its right name: old-fashioned theological anti-Semitism,” he wrote in an article.

“There’s no question he was a man who created debate, in a healthy sense,” Mr. Stern said. “He was sufficiently independent that he did not need other people’s approval before he would take a position. Yet one of the dangers of being an independent thinker is you develop the habit of being countercultural.”

Rabbi Hertzberg even tweaked those whose programs for fortifying Jewish identity were grounded in Israel and the Holocaust. He called the Holocaust Museum in Washington “the national cathedral of American Jewry’s Jewishness.” As someone whose European relatives had died at the Nazis’ hands, he said he was trying to make the point that Jewish leaders needed to find more cerebral and spiritual programs for retaining the allegiance of believers. He urged Jews not to become reclusive and insular in the aftermath of the Holocaust but to open themselves to the pain of others.

His approach to any issue was consistently liberal, said Mr. Epstein, a businessman, adding, “But he came at it from his deep Jewishness and from his obsession with the Holocaust.”

The rabbi was also an early advocate of full equality for black Americans and an ally in the civil rights movement. He was among the prominent participants in the March on Washington in 1963, during which the Rev. Dr. Martin Luther King Jr. delivered his “I Have a Dream” speech at the Lincoln Memorial.

Rabbi Hertzberg was the author of a dozen books, several of which are regarded as important contributions to Jewish thought and history. In one, “The French Enlightenment and the Jews: The Origins of Modern Anti-Semitism” (1968), he argued that the works of Voltaire and other 18th-century philosophers betrayed a pervasive antagonism to Jews and to their existence as a distinct people.

A man of letters; of moral courage; of strong convictions. A man of ideas. Alav ha’shalom (peace be upon him).