Bang(itout)…in the Name of Love… 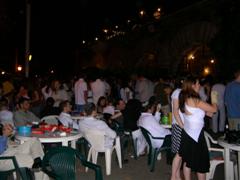 On the traditional Jewish holiday of love, the Bangitout Tu B’Av party brought hundreds of Jewish singles in their twenties, thirties and forties (and yes, a few in their fifties) to Riverside Park for one of the largest gatherings of the year. I knew a lot of people, but I also didn’t know a lot of people, which is an achievement, and an encouraging thing, since it often feels like I’ve met every New York Jew imaginable. This proves it ain’t so (for which I am eternally grateful).

Lucky to have snagged a cool night in an otherwise humid summer, the Bangitout crew greeted each partygoer with a sticker with a number on it and a cardâ€”if you saw someone you liked and were fearful of approaching, you’d write their number down and submit it to the BangItOutstaff; they’d see if it was a match and get you in touch with each other. 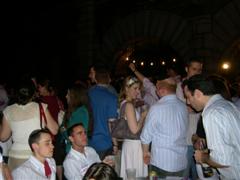 I’ve gone for three years in a row, and some years (okay, one year) it resulted in a date, and in others it didn’t. But I’ve never used the card. I think it’s because I don’t just see pretty things and want them, I want to know they’re of a compatible quality, which necessitates further investigation (and also proves that as a woman, I’m motivated by something beyond the external). So the numbered stickers don’t help me, unless we’re both too shy to ask for each others’ â€œreal numbersâ€ (a business card, an email address, a phone number)â€”and really, I know that the prospect of rejection sucks, but who wants to be with someone who’s not confident enough to ask for your phone number?

There was lots of music, which I’m pretty sure was assembled as much for its thematic appropriateness as it was for its danceability. Top plays of the night belonged to Kanye (â€œGolddiggaâ€), Nelly Furtado (â€œPromiscuous Girlâ€), and Christina (â€œAin’t No Other Manâ€), with a side of Missy Elliott (â€œWork Itâ€) and the seemingly out of place, yet reassuring Phil Collins (â€œYou Can’t Hurry Loveâ€). There were camera crews in attendance, one for a purpose I’m not sure of, and the other for a Columbia Film School student’s project. (I wasn’t drinking that heavily, but I’m pretty sure I remember doing a lip synch on camera to a George Michael’s â€œFreedomâ€â€”which, when it was on MTV featured a bevy of beautiful models doing the syncing…oh dear. )

Still, the function and dysfunction of single life followed us into the park. When a friend of mine complimented a man’s glasses as she passed him, instead of smiling and saying thank you (let alone taking it as an opportunity to start an actual conversation), he stared at her like she was insane. Everyone I spoke to seemed to have an ex or an almost-ex in attendance. Then some socially awkward guy was yelling at someone else in Hebrew. The truth is, negative stories are much more interesting to relate than the positive onesâ€”but some people actually overcame shyness and the sheer availability of the hordes and spoke to people. There was also much dancing. I even saw a few people exchange phone numbers, if you can imagine that. But in any case, hundreds of people came and stayed for hours, which is the hallmark of a successful event, even if no marriages result.

As I’m pretty sure I said to one of the camera crews (which followed me around for some B-roll footage of what it’s like to wander through the crowd), an event like this is too overwhelming to expect dozens of people to hook up and get married as a result. But what large-scale jewish singles events do provide is an opportunity to expand our circles, the ones that seem so small that they sometimes feel like they’re closing in on us. Friends meeting friends of friends is a much more realistic and solid road to romance. That said, if I’m single next year, I’ll likely go againâ€”sans the camera crew, I might just have a chance.