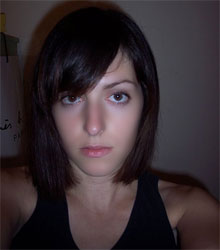 I ran a beyond-3-miler in the park twice this week, which suggests that I’m not quite as out of shape as my blogging activity level would have you believe. The running also means, according to a blog entry found via Gawker, that I am not a “JAP.”* JAPs, according to this seemingly reliable if offensive news source, do not exercise, but just show up at the gym and primp or talk on the cellphone.

This is unacceptable. I must do something to correct what could be perceived as an insufficient level of Jappiness. So I will tell you in excruciating detail about the haircut I got this evening:

It had been a while. When my friend Masha saw me recently for the first time in a bit, her remark was not just that it had been some time since we’d seen each other, but that my hair had gotten long. The long hair and bangs look was less Jane Birkin than I’d hoped, which has something to do with me not being a 15-year-old British ingenue, but more to do with my having ten times the amount of hair that style permits. And the once-red ends, now orange, weren’t adding much.

So a haircut was in order. But where?

As usual, I considered doing it myself (lost some JAP points there as well, but read on!), but remembered that I cannot see the back of my head. I also considered standby chain Biguine, until reading uniformly awful reviews on Citysearch. This left Lotus, which roommate Katherine had recommended, and which I vaguely recall once not-destroying my hair. Long story short(er than it could be), I deemed one branch of Lotus too expensive and the cheaper branch too… closed for the evening. Which meant one of two things. I could go home, hair longer than ever, or I could go to the nearby Mudhoney Hair Salon, which I’d long admired yet always deemed too… something. Too hip, too expensive by maybe $10… but mainly too hip. Everyone inside was always getting some haircut that looked like it came from 2007, just a bit too aesthetically correct to be a regular old hipster haircut. I wanted long, sideswept bangs, and felt that if anyone could do this, it was the good people of Mudhoney.

I entered the salon, and one of several over-the-top hipsters working there, an androgynous woman with a thoroughly modern mohawk, told me there was still time to get a cut, but that it was cash-only. Which meant a trip to a bodega ATM, not something I generally consider, but time was of the essence. I returned, and a tall, extremely skinny, extremely tattooed man with most of his underwear showing, who was carrying a tiny black Pomeranian puppy, asked me what I wanted done to my hair. This was looking like it might be a mistake. This man (who I believe is the same Brendan as interviewed here) was seriously the hipster to end all hipsters. I was dressed, for a change, in a way that vaguely suggested I don’t wish it were 1998 (which I do!), but no matter, I was far, far too dorky for this place.

Normally I don’t confide in hairdressers. I don’t find it any easier to launch into a boys-discussion with a perfect stranger than, say, on a blog. Here, I was intimidated by the guy cutting my hair, so I said just enough to indicate the sort of cut I wanted. He took his time, which, after a disaster at Jean Louis David (sounds French-Jewish, but that’s not enough to get my blessing), I understood to be a good sign. Every so often, the Pomeranian would yelp, and sometimes this would coincide with when the scissors were just slightly poking into my neck. But my hairdresser didn’t flinch. And when all was said and done, I’d gotten a haircut that pleases me immensely. It’s chic, in it’s own way, plus, I can now walk into even the divey-ist of dive bars in gentrifying Brooklyn and hold my head up high.

*The term is of course derogatory, but ripe for reclaiming, ala “queer.”