Hate Site of the Weak XVII 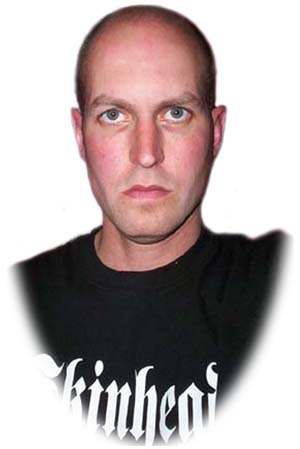 Our latest winner of the coveted HSOW award is Skinheadz. The site is elegently designed, replete with cartoonish images of skinheads doing various skinheady activities (carrying baseball bats, waiving american flags and singing at a microphone). The site contains a forum, news archive, a ‘skins in action’ section and even a ‘who’s who’ section.

Who are these skinheadz and what do they do? Well, on the who’s who page you can find pictures of some skinz invovled with the site, pictures of some ‘martyrs’ to the cause, and a sort of ‘hall of fame’ of skinheadz along with their ‘achievements’. For instance, we can all be proud of Jason Simmons for his efforts in organizing a skinhead essay contest and Brent Postlewait, first nationally prominent skinhead tv-personality.

The rest of the site is full of articles on a wild and wide assortment of topics. The themes, however, become evident fairly quickly. Here’s a few excerpts.

From ‘The Best Thing that Ever Happened’:


became a Skin for two reasons. First, I love my country. Second, I was tired of us being taken over by Negroes, Mexicans and all the rest. The “last straw” was when a Mexican actually moved next door to me, in rural Kentucky, of all places.

Let us demonstrate, agitate and congregate for an all-American America, where Orientals, Africans, Mexicans and Jews “go home,” whether born here or not. Our logic and patriotism drowns out their clamor and treason. The “big one” Jason wants is not just some stroll down a boulevard, but our march to power. We’re on our way.

I was once invited to be on the Sally Rafael Show, but after producers perused The Nationalist Movement website, of which I was one of the officials, and spoke to me on the phone, they advised that I was “not really what they were looking for,” since I was not advocating violence, using profanity or slinging the “N” word. They, later, said that I sounded “too intellectual.”

So what can we learn about skinheadz from all this? A great deal if we take the time to listen to them in their own words. On that note, let the Grand Muffti leave you with a final snippet, from ‘Brother Avenging Brother’:

My father taught me that “white-is-right” and nothing else. Until my brother was killed, I had never, until that point, felt any animosity towards anyone. I knew that non-whites were social-parasites and that they didn’t belong here, but I had never felt the pride and love for my people and blood, as I do now. I want to make a difference. That’s why I’m here. I’ll go to any lengths to make sure that change for the better comes about.

Chilling words. Worst of luck to ya, mate!

Oh yeah, on the off chance you want to join these psychos, click here.