This Week in Borat 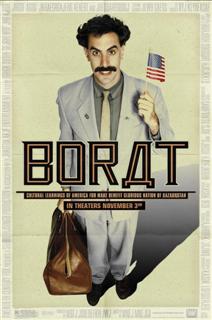 I admit it, I saw that Harry had the story first about Borat speeking a leetle beet of Heebrew. And I also laughed at this clip, in which Borat tries to train a dog to attack Jews. And now, some fool over at Beliefnet wrote a post about this week’s discovery about Borat speaking Lashon Hakodesh. Sort of. Although I suspect most authorities would agree that once Borat’s done speaking it, it kind of loses some holiness.

Anyway, the reports included one Wikipedia’d report of Borat singing a song with words that include “Koom Bachur Atzel, V’Tze L’Avodah.” Roughly translated, this phrase means “get up, you lazy sumbitch and get yo ass to work.” Which, in addition to being a phrase that I occasionally mutter at myself at various occasions of rent being due in my freelance life, is also part of a Hebrew kids song that I learned way back before there were people who loved the 80s.

But one of the most entertaining Borat-related pieces I’ve read this week has to do with NY-based journalist Liel Liebovitz trying to chase down an interview with his comedic hero for the Jewish Week, only to be refused. Why was the interview denied in the end? As some of you may know, Sacha Baron Cohen, the committed comedian behind the Khazakh kharacter has been appearing only in character, going so far as to don his now-famous green V-thong bathing suit (see this MySpace page for a photo, or–as I recommend–don’t), and answering interview questions as Borat himself. Who is anti-Semitic. And therefore would never talk to a Jewspaper. Sad for Liel. But funny to read about.

Meantime, the actual country of Kazakhstan continues to register its alarm at Borat’s increasing popularity, resulting in accidentally hilarious PR campaigns; one such ad supplement in the NY Times claimed that the country had the world’s largest population of wolves, a claim that was upon investigation proven false. (It’s Canada). Kazakhstani officials have also threatened to sue Cohen, with whom Borat denies any connection (Borat’s response is here.) And the United Arab Emirates has announced plans to send their multiculturalism ambassador, a fictional cat named Mr. Buffy (“a fluffy buff-coloured cat who wears jeans, a yellow shirt, a polka-dot necktie and a red baseball cap”) to Kazakhstan. So it was Cohen gave us Borat, but Kazakhstan itself continues to entertain, even if unintentionally…

So even if an entire country decides to throw us all down the well, at least we’ll plummet while laughing.