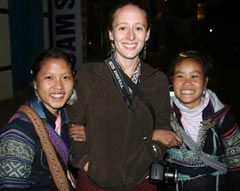 You’re on a mountain top way station near the Chinese border surrounded by Vietnamese ethnic minority villages. The inhabitants of these villages live, dress and farm much like they have for hundreds, if not thousands of years, but for the ubiquitous presence of TVs.

Only the young generation, hawking their tribe’s wares to tourists knows any English beyond “buy from me, buy from me”.

What the heck? How pervasive is Israeli travelling that 12 year old girls from the Black H’mong tribe can sing a Purim song and call me “hamuda”?

The kids skipping school and selling stuff on the streets are terribly friendly, even after they realize you aren’t buying anything. The above mentioned Hebrew speaking ones hung out with a group of us for a good chunk of the night. 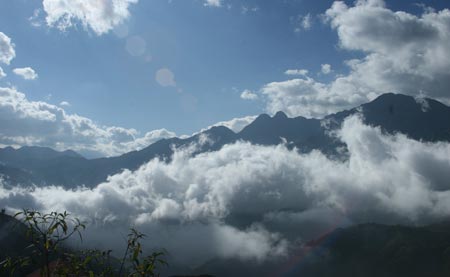 Seeing and hearing about their odd little tribal customs like no kissing, ever, not parents, not husbands or how they change the style of their hair upon marriage, their dress (they too wear the same outfit their people have been wearing for the last several hundred years everyday TM, but they apologize to you for their shameless conformity) reminds me that my heritage too is tribal at its core, with our own style of dress, customs and folklore. It’s just that we’ve prospered enough to have the option to leave it behind.

A blessing and a curse to be sure. Still, I just find myself happy that us Jews never got reduced being an ancient tribal tourist attraction, hawking menorahs on the street of some backward country where you can’t drink the water. Not that there’s anything wrong with that.