Activist Jews on Hollywood Boulevard, when confronted with the literal footsteps of anti-Semitism, have little choice but to react. 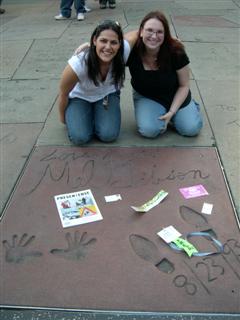 Why’d we do it? For fledgling magazines and media moguls…for every little Jewish baby who smells so nice, for Jewish mothers, for people in the middle, for right-wing crazy people and left-wing bleeding hearts, for people who voted for Lieberman just because he was Jewish and for those who voted for someone else davka because Jews in public office wasn’t good for the Jews, for every kid on birthright who wanted to know why Moses gave the Ten Commandments on Masada, and for every Jew who ever said, “that’s the shul I wouldn’t be caught dead in.” That’s right, fellow Jewliciousers. We did it for all of you.

For extra Jewlicious points, identify all the items on the slab of concrete. Enjoy!