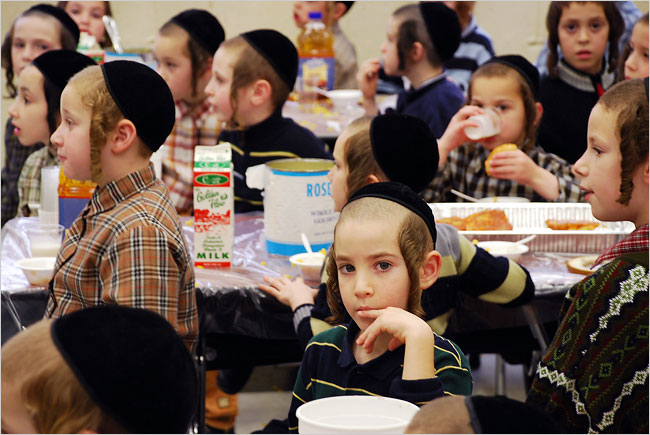 Yesterday, the New York Times had an interesting article with some lovely recipes from the Satmar community in Kiryas Joel.

AS Mindel Appel showed me the contents of her freezer, my pulse began to race.

Out came her homemade kokosh cake, similar to babka. Next were shlishkes, little potato dumplings that can be tossed in sugar, breadcrumbs and butter, or stuffed with lekvar, a kind of prune preserve. Finally, she brought out a Hanukkah delicacy, the cheese Danish called delkelekh.

Of course, these Satmars are descendants of Rabbi Joel Teitelbaum’s Hungarian community and are in the process of rebuilding their community which was extensively wiped out in the Holocaust.

One of the world’s largest groups of Hasidic Jews, the Satmar originated in Szatmarnemeti, Hungary (now Satu Mare, Romania). There are communities in Williamsburg and Borough Park, Brooklyn; Monsey in Rockland County; and here in Orange County.

The founder of the Satmar Hasidim, Rabbi Joel Teitelbaum, was saved when more than 12,000 Jews from Szatmarnemeti were deported to Auschwitz. With the remnants of his sect, he settled in Williamsburg in 1946.

Concerned about assimilation, Rabbi Teitelbaum wanted a modern shtetl in America. In 1977 he bought a tract here and settled 14 families. Now there are 3,000 families, most of Hungarian descent, in Kiryas Joel.

Nice write-up with some terrific recipes. My favorite part, however, was:

Rabbi Jacob Freund, demonstrated his version of letcho. A burly man who is proud of his position as a village trustee, he sat down at the counter, carefully cutting peppers and tomatoes.

â€œBesides today, I have made letcho only 11 times in my life,â€ he said. â€œEach time after my wife had a baby.â€

That’s right, you can throw out that sex manual (or the Cosmo article you saw in the doctor’s office) with the instructions on foreplay.

Recipes: Delkelech; Stuffed Under The Skin Chicken; and Eggs With Tomatoes, Peppers and Onions – Letcho.

Don’t forget, by the way, that Theodore Herzl, Harry Houdini, Imre KertÃ©sz, Robert Capa, AndrÃ© KertÃ©sz, the Reichmanns, George Soros, Andy Grove and these many other Jews are not Satmar but are all from Hungary. Here’s a wikepedia overview of the history of that community, which was mostly destroyed in 1944 by the Nazis in a few swift months.