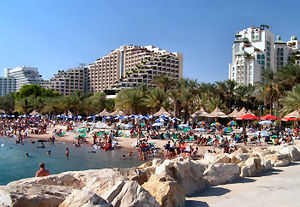 Eilat, known for its babes, beaches and cheesy decor, was the location of a suicide bombing, apparently engineered by Islamic Jihad and Al-Aqsa Martyr’s Brigades. The bomber, 21 year old ex-Gazan Mohammed Saqsaq, was apparently driven into town by a friendly resident. Saqsaq ended his and 2 other people’s lives in a bakery, apparently as a result of being reported to the police for suspicious behavior.

What Muffti found odd and terrifying about the news report was the following line:

Islamic Jihad said the attack was meant to help bring an end to weeks of Hamas-Fatah infighting…We held back on operations for a while and gave the stage to Fatah and Hamas to conduct unity government discussions. We saw that it has not achieved anything, so we have reverted to martyrdom operations.”

It doesn’t seem to have worked: Hamas stuck to their usual guns, that the attack was a ‘natural response’ to occupation. Fatah paid lip service to their most recent party line:

We are against any operation that targets civilians, Israelis or Palestinians

Sounds nice, doesn’t it? And we were doing so well: the last, ahem, martyrdom operation in Israel happened last April.