Care for Some Hitler With Your Coffee? 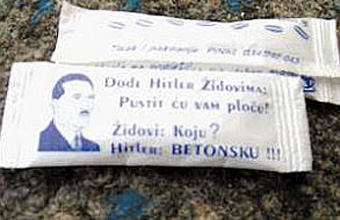 Gospic, a Croatian central town, was the subject of controversy as packets of sugar turned up at local cafes bearing an image of Hitler and an anti-semitic joke. According to Republican Riot, the joke translates as follows:

Get it? Concrete! Get it?

Apparently the joke is less senseless (though perhaps equally unfunny) when you come to realize that in Croatian, the word ‘record’ is translated as ‘ploca’, which is ambiguous between ‘record’ and ‘tablet’, the latter apparently being synonymous with tombstone.

The Weisenthal centre, of course, complained and the relevant politico figures (albeit from organizations you’ve probably never heard of such as the Croatian Helsinki Committee) said familiar politcal type things. Interestingly, however, Å½arko Puhovski of the aforementioned committee told B-92 that:

This is not about someone spraying graffiti, this was printed in several thousand copies, for weeks, perhaps months, and no one reacted. Then Novi List journalists reacted. Then there was silence again, and then the Simon Wiesenthal Center issued a statemen

In other words, no one in the relevant areas really gave a fuck either way about sugar packets. Police are investigating and a local company called ‘Pinki’ who are apparently connected to the production of the offensive packets. Company owner Anita Ivanesic refused to comment other than to say that most of the allegations were ‘untrue’.

Eh, whatever. Muffti is pretty sure we have bigger fish to fry than a few offensive packets of sugar. Like freeloading, drunken, kids who lack originality in dress, listen to crap music and ruin Michael and Phoebe’s good times. 🙂 In any case, Muffti is likely to be in Croatia in April and he’ll be sure to investigate, as best he can, the case of the Hitler sugar.