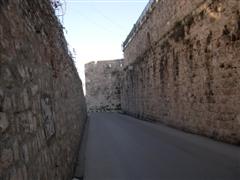 Over the last few months, I’ve been thinking a lot about Israel–probably because I’ve been there twice in a period of seven consecutive months, which has never in my life happened before. It’s also possible that my involvement over at PresenTense has me delving into the Zionist condition (if, indeed, there is only one condition that can be so defined by the “Z” word) in new and exciting (read: confusing) ways, granting me the opportunity to write about my Diaspora guilt and speak at events where we come up with more questions than answers.

For instance, Monday night I was moderating a PresenTense event at NYU’s Bronfman Center for Jewish Life, and found myself surrounded by a small, but dedicated group of pro-Israel Jews in their 20s, debating the nature of Zionism in the Diaspora today. Some of us spoke of our Israel experiences, those moments when we understood something about our lives or perspectives had changed. Some told of birthright trips, or of journalistic hasbarah as activism, a sort of national service that could make a difference in how Israel is perceived by people in other countries.

And I also felt myself being dragged into the concept of what creates perception, especially as regarding an entity as spiritually loaded as Israel generally, and Jerusalem specifically.

Is Jerusalem beautiful because it intrinsically, essentially, aesthetically, objectively is? Or do I find Jerusalem beautiful because when I look at it, I’ve been conditioned to see a place of history, religious meaning and conflict, a spiritual and legendarily precious territory protected by co-religionists and members of my extended family, and battled over by three religions? If three religions want it, it must be really good.

But Israel is more than just Jerusalem. And in fact, Jerusalem doesn’t resonate for many of Israel’s citizens, especially the non-religious, who may still refer to immigrants as olim, even though they might deny that the pilgrimage has any relationship to an ascendant holiness.

And what of all the people I know who “made aliyah,” often trumpeting phrases like “back to the land of our holy people” and “where messiah will come from” and “going back to the Promised Land,” only to return after a few years. Is there such a thing as a situational or temporary aliyah? Is it akin to the whole discussion of “friends with benefits,” meaning great if both parties agree, but seldom is there such consonance between the parties? And what about for secular Zionists, for whom Jerusalem and religious freedom holds little, or perhaps even negative, appeal…does the term “aliyah” still resonate? If the “elevation” isn’t spiritual in nature, what is it?

Re-reading the above, it’s possible that I overthink things too much. Maybe. But I don’t know how else to uncover the answers. So I just keep thinking and writing, and hoping that the discussion is one that other people care about too.