The Surprise Is The Medium, not the Message 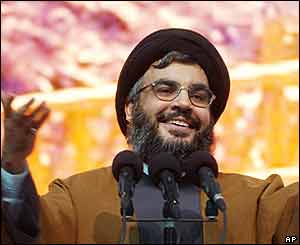 Sheikh Hassan Nasrallah, speaking to Professor Sa’ad A-Din Avrahim in an interview published in Al-Rai Al-aam. Accordign to Avrahim, Nasrallah said some things that are only startling because, well, he said them. Here are some snippets:


I don’t hide the fact that we expected Israel at some point to attackâ€¦but the information we had did not suggest they would choose to attack when they did.

Iran assists the organization with money, weapons, and training, motivated by a religious fraternity and ethnic solidarity…And the help is funneled through Syria, and everybody knows it.

It could be that I made a mistake, only God doesn’t make mistakes, and for that I apologized before the Lebanese nation and for that we paid a very heavy price in blood. [Nonetheless,] We do not hesitate to bring our boys into our just struggle.

So, what do we learn? We learn that Israel failed to take out Hizbullah despite having the advantage of surprise both in timing and force. We learn that Iran is bold enough to let their man in Lebanon openly flaunt their support for terror.

Quotes taken from Haaretz and Jpost.