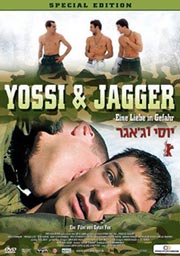 This evening, my favorite film director, and in his words, Israel’s most successful, none other than Eytan Fox spoke to a group of students and grown-up types at NYU’s Bronfman Center. The man behind “Yossi and Jagger,” “Walk on Water,” and the new film, “The Bubble,” premiering April 30 at the Tribeca Film Festival, asked if it was still Passover, after Sam, the guy who introduced him, offered the audience “semi-edible Passover treats.” Fox, who is living in the south of France for a few months, â€œfar away from Israel and the Middle East,â€ is currently doing a tour of US college campuses. He is developing a film about young Jewish Americans and we, the audience, are perhaps, alas, material.

Fox’s father, who died a few months ago, was one of the founders of Camp Ramah. Fox himself, who made aliyah along with his family, moving from New York to Jerusalem at age 2, was sent back to the States to attend Ramah as a kid. It was there, he explained, that he learned about Judaism, something his secular Israeli friends knew and cared little about. (His talk made me feel guilty about hating my month at Ramah at age 8, in a bunk full of girls obsessed with whether clothing matched–perhaps this was bad luck).

Fox pointed out that, before being Eytan, he, like the guy who introduced him, was once called “Sam,” but was mocked for having a name similar to a character in an Arabic children’s TV show. His parents had also given him the name Ethan, so he became Eytan. He told us about his childhood in Jerusalem, where he grew up in American household, with a mother who was a â€œproper Manhattan lady.â€ Fox said his mother had trouble adjusting to 1967 Jerusalem, then â€œdecided to become more Israeli than Israeli,â€ and ended up becoming a member of the Jerusalem Councilâ€”developing Palestinian neighborhoods in East Jerusalem and would bring Arab friends over for Shabbat dinner. As a child, Fox recalled being embarrassed by his mother when she would come to pick him up from school in posh clothing and jewelry, while the other Israeli mothers wore something akin to “pajamas.”

Like our good friends Yossi and Jagger, Fox served in the IDF. He went on to study film at Tel Aviv University, to produce a romantic comedy (“Song of the Siren”) deemed frivolous by an American Hadassah audience, to direct an Israeli TV series called “Florentine” which included gay sex before, he told us, American TV made such a leap, and, most importantly as far as I’m concerned, to make the most amazing movie ever, “Yossi and Jagger.” Surprisingly, Y&J was originally a made-for-TV movie, but as Fox noted, once it was shown in theaters, “no one asked for their money back.” Next came “Walk on Water,” which he told us was the biggest Israeli film ever outside Israel, as well as in US, and which stars the lovely Lior Ashkenazi. His latest film, “The Bubble,” refers to a clique of hip and famous Tel Aviv residents who hang out on Sheinkin Street, espouse left-wing-lite politics, and generally sit around looking fabulous. Fox showed us a documentary about the making of the movie, and I will not say too much, other than that Lior Ashkenazi a) plays himself, and b) moons the camera. The movie, we learned, is about loving Tel Aviv, which, if it’s anything like it appears in what we just watched, wouldn’t be too difficult. And no, I’m not referring to Ashkenazi’s ass, but rather what appears to be a vibrant and exciting street and cafe culture. Seriously!

After the documentary, Fox answered some questions, showed us the trailer for “The Bubble,” and then allowed us to speak to him directly. I am the least articulate person ever when confronted with my idols, so I told him I love his movies, then launched into something totally incoherent. But all told, this was most exciting. So much so that I have posted this despite being very sleepy, too much so to add links to all these movies…