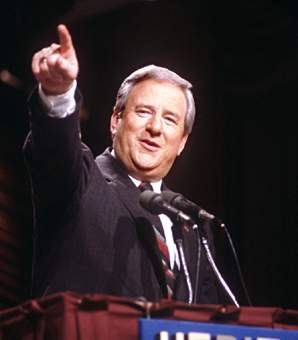 Muffti was not a big fan, no matter how pro-Israel he was and how much Abe Foxman liked him. Here’s an assortment of quotes to remember the Reverend by:

If Chief Justice Warren and his associates had known God’s word and had desired to do the Lord’s will, I am quite confident that the 1954 decision would never have been madeâ€¦. The facilities should be separate. When God has drawn a line of distinction, we should not attempt to cross that line.

I hope I live to see the day when, as in the early days of our country, we won’t have any public schools. The churches will have taken them over again and Christians will be running them.

“Labor unions should study and read the Bible instead of asking for more money. When people get right with God, they are better workers.”

And, I know that I’ll hear from them for this. But, throwing God out successfully with the help of the federal court system, throwing God out of the public square, out of the schools. The abortionists have got to bear some burden for this because God will not be mocked. And when we destroy 40 million little innocent babies, we make God mad. I really believe that the pagans, and the abortionists, and the feminists, and the gays and the lesbians who are actively trying to make that an alternative lifestyle, the ACLU, People for the American Way — all of them who have tried to secularize America — I point the finger in their face and say, “You helped this [9/11] happen.”

The Bible is the inerrant … word of the living God. It is absolutely infallible,without error in all matters pertaining to faith and practice, as well as in areas such as geography, science, history, etc.

Archbishop Desmond Tutu is a phony.

There are about 200,000 evangelical pastors in America, and we’re asking them all through e-mail, faxes, letters, telephone, to go into their pulpits and use their influence in support of the state of Israel and the prime minister.