Y-Love at Lollapalooza? Why Not! 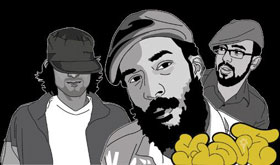 Hey! Lollapalooza man! Started in 1991 by Perry Farrell, Lollapalooza represented youth culture in the 90’s in much the same way Woodstock did in the 60’s. At its best, this traveling festival featured edgy, non-mainstream bands. At it’s lowest point it became over-commercialized, as represented by the inclusion of friggin’ Metallica in 1996. Not surprisingly, the increasingly convoluted festival folded operations shortly thereafter in 1997. Attempts to revive the brand started in 2003 and after a few fits and starts Lollapalooza has morphed into a weekend destination festival taking place in Chicago’s Grant Park.

This year’s lineup includes grunge artists Pearl Jam and French Electronica masters Daft Punk as well as Iggy Pop, Modest Mouse, Interpol, the Yeah Yeah Yeahs, The Roots, Patti Smith, etc. The Jewesses are in the house as well with Amy Winehouse and Regina Spektor amongst the headliners. But I think we can do with more Jews at Lollapalooza, and that’s where you come in.

Let me tell you a little about Y-Love. Here’s a quick description from the Lollapaloza Web site:

Y-Love (Yitz Jordan) is an MC unlike any other; he converted to Orthodox Judaism in 2000, and later took on the traditions of Hasidism (the mystical branch of Orthodox Judaism). He is among the most innovative MCs on the scene, weaving seamless polyglot rhymes in English, Arabic, Yiddish, and Hebrew. Most unique is Y-Love’s revival of Aramaic, the language used to discuss Jewish Law and Kabbalah. With each word he spits in the tongue of ancient Babylon, Y-Love breathes new life into hip-hop, one beat at a time.

The page has a free track you can listen to. Other spots for more Y-Lovin’ include his MySpace page and the Web site of his DJ Handler. Both of them are flying to Israel as we speak to attend and perform at the ROI120 Summit. I saw Y-Love perform at the last Sephardic Music Festival and he was VERY cool!

Long story short – Lollapalooza is running a contest. If enough people vote for Y-Love, he and his crew may be able to play at the show – which means great exposure and publicity. Aramaic raps are what America needs today! So… vote NOW! It takes like 2 minutes and this round ends June 30th! So… do it now, tell your friends!