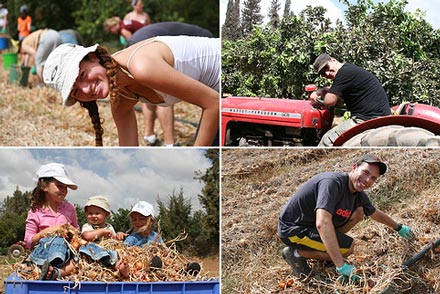 Well, not Rosh Hashana per se. More like food served at Rosh Hashana dinners that requires onions. And not all dinners, just those dinners that have benefited from the largesse of Table to Table in the distribution of the onions that we picked on Friday (NO ONIONS IN SHAKSHUKA!). One busload of volunteers left from Tel Aviv and another from Jerusalem, while others arrived by car on their own. We spent the bulk of the morning picking onions – all of us, recent olim, students, vegans, a firefighter, assorted babes etc. We were paired next to an IDF unit who also chose to use their day off to pick onions. We got a little competitive – who would pick the most onions? – so some of us decided to psyche out our opponents and started taunting the soldiers by yelling “IDF Sucks!” and “We’re the Hezballah of Onion Pickers!” but it was all in good fun and no one got shot. And man did we pick a lot of onions.

Afterwards we enjoyed a falafel and watermelon lunch as well as a sterling variety of soft drinks and water. Thanks to Dalit at Table to Table for setting this whole thing up, to Shani from Stand With Us International for being the poster girl of the event, to the other Shani from the Jerusalem Post for posting this on Janglo, to Ricky for being the Tel Aviv bus monitor and posting the story on the Jerusalem Post Web site and to everyone who showed up to get food on to the tables of those who need it and in the process help me look like a real friggin’ humanitarian who could not possibly be a psycho…

OK. That was a digression. Forgive me. Inside joke. Anyhow, click on the flickr tag below for all the fun photos from Jewlicious at the Farm! Also, some of you who couldn’t make it expressed an interest in donating money to help Table to Table do what it does. Y’all asked me how and th answer is simple – go to the Table to Table Web site – tabletotable.org.il – and click on the Support Us link on the horizontal menu bar on top. Yaaay! Doing good deeds is fun!