A Response to Beery and Horwitz 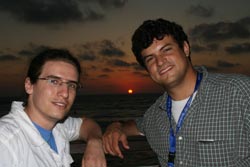 Ariel Beery and Aharon Horwitz, the dynamic duo behind Presentense and PICZ etc. recently penned an op. ed. piece in Ha’aretz titled Investing in Value. In this article they seek to encourage a new model of Jewish philanthropy and innovation based more on a business start-up model:

Instead of providing massive and recurring grants, philanthropists should focus on translating founders’ “sweat equity” into viable prototypes through small grants of seed capital. Then, if the market responds favorably, philanthropists could help bring a venture to scale while requiring sustainability. Finally, out-sourcing, mergers and acquisitions would be encouraged to cause entrepreneurs to share best practices with one another.

They correctly note that currently “…well-meaning philanthropists deem projects or organizations successful on the basis of broad studies or a good word put in by a reliable source.” However, these studies are often self serving, designed to confirm a pre-existing desired result (As Benjamin Disraeli once noted “There are lies, damned lies and statistics”). Furthermore, what Beery and Horwitz kindly call “a reliable source” is sometimes just a self-appointed expert whose greatest talent is shmoozing people in power. The inverse case in point is Erez Safar, aka DJ Handler (see previous article on the Forward 50) who, as we have mentioned before, does amazing things in terms of engaging unaffiliated young Jews in Jewish cultural activities. But he’s not a shmoozer or a self-promoter, he’s a doer. And he’s busy as all heck, such is the demand for his brand of Jewishly resonant cultural activities amongst his 20-35 year-old demographic. He doesn’t have time to go to cocktail parties and self-indulgent assemblies. He and those of his kind who are outside the warm and lucrative embrace of the organized Jewish community have no choice but to use the traditional business models espoused by Beery and Horwitz in order to maintain their activities – people vote with their wallets and if they like what’s being offered, they’ll pay for it.

The problem with this model of course is that not all innovative and important Jewish communal activities can or ought to fit into a dot com inspired business model. Some will note that DJ Handler’s ventures are all for profit, but first of all, there isn’t much profit in that kind of business, especially when most revenues are used to pay for activities and finance future programs. Secondly, do you know how expensive and complicated it is to set up a non-profit? DJ Handler can easily focus on non-Jewish themed projects and make a lot more money. His shtick is thus a sort of hybrid – a revenue generating endeavor with a socially and communally important goal in mind. If he were to receive communal funds he can and ought to be accountable for the measurably successful use of those funds, but one ought to also consider the fact that his mission is not predicated on the generation of revenue or even on the number of Jews who attend his events. If that were the case then projects like Handler’s would focus on mere numbers rather than the transmission of values or the effective engagement of their target market. Shemspeed parties would replace Aramaic Rappers with, I don’t know, hot dancing go-go girls wearing tight “I Love Hashem” t-shirts. That’ll get a lot of people through the doors, but what will it really accomplish?

Another example comes to mind. At ROI120 I met Inbal Freund, the Director of Mavoi Satum, an Israeli organization that assists agunot, both directly and indirectly by lobbying the government and the rabbinic courts. They do amazing things but of course they need money to make it happen. How do you apply the dot com business model to their work? Give them cash on the basis of how many divorces they facilitate because that’s an easily quantifiable metric and measure of success? What about the far more difficult but important task of trying to educate the public and change the attitudes of the religious authorities? Those are long term elements of their mission that are far more difficult to measure but very important none the less.

So yeah, I kind of agree with Ariel and Aharon. We need better accountability and better defined goals. Sure, let’s incorporate more hard-nosed business practices in the way we as a community disburse funds. Let’s also try to figure out a better way to encourage innovation and innovators who are outside the fold so to speak. But let’s not forget about the difficult to achieve but vital long-term projects too. For instance, a renaissance in Jewish literacy would be a difficult and expensive project to undertake, we won’t get the sexy numbers that say Taglit-birthright israel gets, but it would be a serious abrogation of duty for our leaders not to do something massive in this area and soon. Let’s also not forget the quirky and the esoteric – the artists, the musicians and all those others whose projects do not fit comfortably within any business model but whose absence from the communal agenda will make us a dour, bland and humorless community.

I’m not kidding myself though. I know that he who pays the piper calls the tune. More and more philanthropists are taking a direct role in how their money is being spent and it is their money. They can do whatever they want to with it. They can send tens of thousands of Jewish kids on free trips to Israel, they can promote an agenda that encourages whatever flavor of Judaism they prefer, they can build a giant tower in the middle of Jerusalem adorned with their name in glitter paint lit up by laser beams if they want. It’s their business. But to whatever extent they actually want to use their money for the betterment of man kind and the Jewish people, I hope they at least consider the various emergent voices from the peanut gallery and try to look beyond the myopic and sheltered world that many of them live in.

Don’t get me wrong – many in the organized Jewish community are trying… blogger and Presentense editor Esther Kustanowitz and IsraelTV correspondent and Jewlicious blogger Leah Stern have been invited to address the GA to discuss Jewish Peoplehood. Lynn Schusterman helped create ROI120 in order to help foster innovation amongst young Jews. The Andrea and Charles Bronfman Foundation chose Jewlicious for inclusion in Slingshot, their list of the 50 organizations most worthy of funding. So thanks for the invitation to the party, now, when can we fucking dance already?