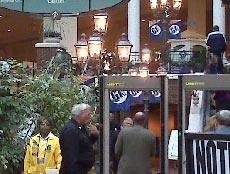 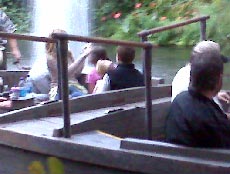 The UJC General Assembly is the largest annual gathering of Jewish leadership in the world. Wall to wall machers baby! This year it takes place in the Gaylord Opryland Resort and Convention Center in beautiful Nashville, Tennessee. As our intrepid embedded photographer demonstrates, security is tight, and that’s cool – we’d hate for anything bad to happen to any of our friends attending “the largest annual gathering of Jewish leadership in the world.” Gaylord Opryland is a huge convention center and includes a 44 foot waterfall – you can even tour the grounds on Delta Floatboats right inside the Hotel! That’s what that second picture is – sorry if it’s not so good, but that’s the best we can get on a cell phone camera. Hopefully our anonymous spy (who is neither Esther Kustanowitz or Leah Stern, both of whom are too busy preparing for their presentations to engage in blogging shenanigans) will deliver some cooler more incriminating photos in the future. For now, here’s what uh, deepthroat has to say:

I am absolutely blown away by the light and water show of the delta island of the gaylord opryhouse convention center. Just a note. If you’re ever in this place for another jew conference, definitely catch this magnificent display of water spraying, lit by colored lights, and accompanied by a multicultural music selection. Oh yeah, there are people here video recording this. They’ve obviously never been to cirque de soleil “o”.

I grew up in Montreal deepie. We eat cirque DU soleil for breakfast.

…there are way too many of us crammed into each hotel room, so whenever we have something delivered-like twelve more towels for the two people officially in the room-the rest of us have to hide in the bathroom until the hotel employee is gone. How Jewish of us to pay for two people and fit twelve in. If the hotel is lax enough that we can get away with it, it’s their fault. They shoulda known what they were getting into with a Jew convention.

Although there are too many restaurants to count, right here in the building, we were too tired to move, so we decided to order room service. The sides weren’t too expensive, so we planned on getting just a few side dishes. But every time we dialed room service, an automatic answering machine told us, “Thank you for calling the Gaylord Opryland in room dining. All of our representatives are assisting other customers. Please stay on the line and we’ll be right with you.” And then silence. This went on for about twenty minutes, and six different calls, until finally one of us guessed, “They’re probably routing the call to India.”. When someone finally did pick up our call, her accent was too thick for us to understand each other, and we couldn’t verify that our mashed potatoes would be 100 percent vegan. Another hungry night…