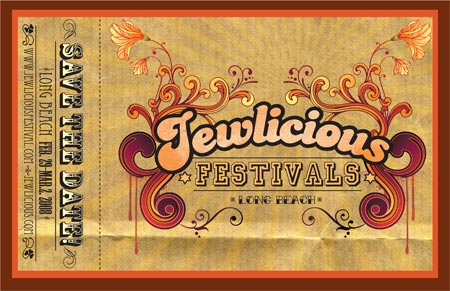 At the recent GA in Nashville, our duly empowered Jewlicious Agents distributed Thanksgiving postcards to all the Super-Jews in attendance. The front was a nice graphic reminding folks of our upcoming Festival (Feb. 29th, Long Beach, California!) and the back included a list of things we here at Jewlicious are thankful for. OK well, the fact is that we slapped this thing together uh… rather quickly, rushed it over by FedEx to Nashville, inadvertently sent it to a Kinkos like a zillion miles away from the Gaylord Opryland, whatever. Suffice it to say that with all the attendant craziness, the final list of stuff we were thankful for was less than a representative list. This would explain the inclusion of things like Arak Limonada and Shakshuka (ahem), as well as Slivovitz and I think Geffilte fish. What other list has both Amy Winehouse and Rambam? I don’t know… I may have been drunk. Deepthroat was definitely suffering from acute GA induced malnutrition. Rabbi Yo… well, I’m pretty sure he was sober and well fed. In a moment of clarity someone sent me this cutsie, saccharine list in my email which I clearly hardly never read:

“I’m thankful I learned how to choose the best kiddush wine at Jewlicious Festival.”
-Eric

“I’m thankful that my son went to Jewlicious Festival and learned how to make the beautiful challah bread we’re eating tonight.”
-Justin’s mom

“I’m thankful Jewlicious Festival is only three months from now! I’m already counting down the days.”

OK, kinda corny I know. Think you can do better? Go on then. Let us know what or who inspired Jewlicious thankfulness in you this year. Leave it in the comments section which will act as a Forward 50 type listing for the rest of us… and uh Happy Thanksgiving from this Israeli/Canadian/Moroccan Jew.