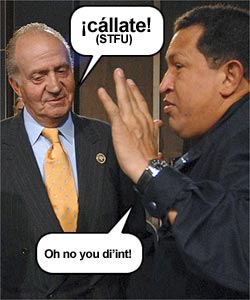 Queen Elizabeth used to be my best monarch friend. She was always perfectly coiffed, dignified and elegant. Fastidiousness against adversity was always her hallmark, both as a young woman during the WWII German bombings of London and as the head of a large and complex family undergoing its fair share of travails. Of course, Queen Elizabeth was always an obvious choice for my best monarch friend – I grew up in Canada after all, where for the longest time she was the official head of state, with said head adorning most of our currency. I was always her loyal subject and she never ever disappointed me.

But things change and where once I was content with a staid and reserved monarch as a bullwark against the turmoil and uncertainty in the world, now I’m looking for one who provides guidance, one who is not afraid to crack that veneer of quiet sophistication in order to do and say what needs to be done and said.

Well, my search is over! I have a new Best Monarch Friend and he is none other than Spain’s King Juan Carlos. At last Saturday’s Ibero-American Summit in Santiago, Chile, Venezuelan strongman Hugo Chavez called former Spanish Prime Minister Jose Maria Aznar, a close US ally, a fascist, adding “fascists are not human. A snake is more human.” This was an ironic accusation given Chavez’s cozying up to various dictators and also in light of his atrocious human rights record back home. Current Spanish PM Jose Luis Rodriguez Zapatero rose to the defense of his one-time rival, correctly noting that “[Former Prime Minister] Aznar was democratically elected by the Spanish people and was a legitimate representative of the Spanish people.” Chavez was having none of it and tried to disrupt Zapatero.

That’s when King Juan Carlos stepped up to the plate and told Chavez what’s what. He delivered a bitch slap to the Venezuelan dictator that was heard around the world when he told him to “shut up.” Chavez later tried to defend his statements, but it was too late. The video of the King’s admonition are all over the Internet, ring tones of King Juan Carlos are selling like hot cakes throughout Venezuela and Chavez was revealed as the shmendrick that he is. Kudos to the Spanish King who demonstrates that intemperate is the new regal! See the video and hear the ring tone on the BBC.