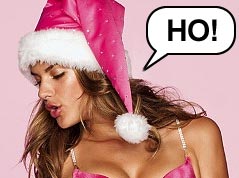 Santas in Australia’s largest city have been told not to use Father Christmas’s traditional “ho ho ho” greeting because it may be offensive to women, it was reported Thursday… Sydney’s Santa Clauses have instead been instructed to say “ha ha ha” instead, the Daily Telegraph reported… One disgruntled Santa told the newspaper a recruitment firm warned him not to use “ho ho ho” because it could frighten children and was too close to “ho”, a US slang term for prostitute… “Gimme a break,” said Julie Gale, who runs the campaign against sexualising children called Kids Free 2B Kids…
“We are talking about little kids who do not understand that “ho, ho, ho” has any other connotation and nor should they,” she told the Telegraph… “Leave Santa alone.” … A local spokesman for the US-based Westaff recruitment firm said it was “misleading” to say the company had banned Santa’s traditional greeting and it was being left up to the discretion of the individual Santa himself.

The Associated Press reports that when some of the world’s leading religious scholars get together this weekend for the American Academy of Religion’s annual meeting, one phenomenon they will discuss is the Flying Spaghetti Monster.

As you may know, the monster first appeared in 2005, during the debate about the teaching of intelligent design in public schools in Kansas.

Bobby Henderson, an Oregon State physics graduate, sent a letter to the Kansas School Board, saying he spoke for the 10 million followers of a being called the Flying Spaghetti Monster and demanding equal time for their views. The tongue-in-cheek letter concluded, “I think we can all look forward to the time when these three theories are given equal time in our science classrooms across the country, and eventually the world; one third time for Intelligent Design, one third time for Flying Spaghetti Monsterism, and one third time for logical conjecture based on overwhelming observable evidence.”

What Henderson was trying to convey was his belief that there is no more scientific basis for intelligent design than there is for a spaghetti monster who flies creating the universe, so the only good solution is to teach nothing in science class but science. But the cult of the monster took off on college campuses, and three graduate students studying religion in popular culture, who were fascinated by the satiric religion, managed to get a panel on FSM-ism at the academy’s annual meeting.

Its title: “Evolutionary Controversy and a Side of Pasta: The Flying Spaghetti Monster and the Subversive Function of Religious Parody.”