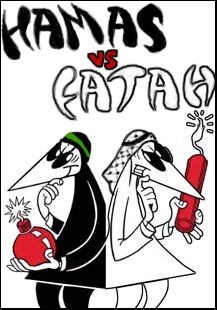 (some of whom are probably terrorists). Arafat’s legacy of violence, brutality and even bad government was in fine form at a memorial for his death yesterday. Fatah, feeling emboldened for reasons Muffti can’t discern, held a rally commemorating the death of Arafat in Gaza. Shooting by Hamas security forces erupted dispersing 250,000 attendees, killing 6 and wounding 85.

Fatah couldn’t lose on this score, Muffti supposes. If the rally went on peacefully and many supporters came out, they get to show Hamas their power base in Gaza is still significant despite their being unceremoniously chased out of the area. If Hamas opened fire, as they did,
Fatah gets to point their fingers at what horrible, dirty, brutal people are running Gaza. And sure enough, Fatah didn’t miss a beat:

This heinous crime is decisive evidence that the coup leadership of Hamas is out of step with the national values and customs and is using blind force and the most bloody and brutal techniques against our people in Gaza.

Good thing we finally have some decisive evidence of Hamas’ brutality. Until now Muffti wasn’t sure.