Shabbat Shalom, from the State of Ice-rael 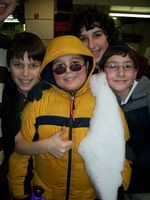 I know this is traditionally themiddle’s bag, but when I come across a photo like this, it’s just Jewlicious enough to risk invading his territory…

My seventh grade son, Judah Goldman, found a chunk of ice AMAZINGLY SHAPED LIKE ISRAEL while playing during recess in the playground of his school –SAR Academy — in Riverdale. Here is the picture of the Israel-shaped ice chunk, with Judah in the center like an Arctic explorer. The school thought this was hysterical and took the attached picture, which was then posted as the Picture of the Week in their online newsletter — Chadashot. As Christmas approaches, it is good to know that it is not just Christians who see the likeness of Christ or the Virgin Mary on their refrigerators or in the snow. Jews also get signs from God.

Shira’s very proud of Judah, and writes two blogs: Bungalow Babe, and her newest, which she ghostwrites or something for her dog, Alfie the Pomeranian. Shira insists that “it is Alfie’s blog. In this morning’s post, Alfie decides he needs to get married to a fellow Pomeranian (marrying within the breed) and wants to create PDate for this purpose. He wants a dark-haired mate…just like his mistress.” Check out the action.