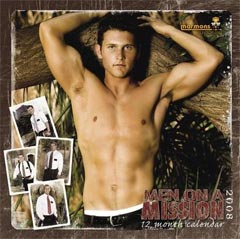 The response to Heeb Magazine’s “Girls of 69” Swimsuit calendar has been nothing short of spectacular, but this isn’t the case for all religion-based sexy calendars. Case in point: Chad Hardy, a lifetime member of The Church of Jesus Christ of Latter-day Saints, and producer of both the 2008 and upcoming 2009 “Men on a Mission” calendar. Chad’s calendars feature shirtless Mormon missionaries as well as photos with them in their traditional white shirt, black tie and name tag outfits and biographical information outlining their religious beliefs. It seems kind of harmless, right?

Not so say the Church Elders who recently excommunicated Hardy for his role in producing the controversial calendar. Hardy, who has sold nearly 10,000 2008 calendars at $14.99 a pop and donated part of the proceeds to charity, is no longer an active Mormon so while he is a bit upset, it’s not likely this will affect him too much. As for Heeb’s calendar, you can probably order a copy from Heeb’s Web site, but if Ron Jeremy hasn’t been excommunicated by the Jews then it’s unlikely that Heeb Editor Josh Neuman will be.

Although really? They ought to excommunicate David Kelsey already. Not that he would care though.