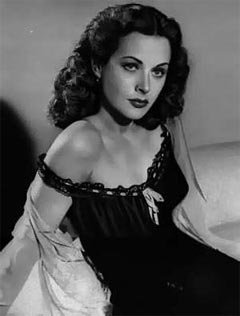 Hey, even genocidal dictators have, you know, needs…
We all know the revulsion (to say the least) that Hitler felt for Jews. But apparently that revulsion didn’t extend to totally hot babes. In the mid thirties, Hedwig Kiesler was one of the hottest and most beautiful stars in European cinema. Her notoriety spread further when she appeared nude and in the throes of orgasm in the movie Symphonie der Liebe or Ecstasy, a Czechoslovak film made in Prague. Born of Jewish Austrian parents, she then married Friedrich Mandl, a Vienna-based arms manufacturer whose father was Jewish. Friedrich was a bit of a freak and a voracious businessman. He kept Hedwig locked up in his castle, and only let her out to attend business meetings where her mathematical prowess came in handy. Mandl also purchased every copy of Ecstasy that he could get his hands on. His possessiveness and insane jealousy however did not extend into business affairs. At one of his lavish parties attended by Adolf Hitler, Mandl desperately wanted to sell munitions to the German dictator. Hitler desperately needed these muntions as well and he also desperately wanted to get with Hedwig. So a bargain was struck and a drunken threesome took place with a less than enthusiastic Hedwig cementing the deal, so to speak. Hitler for his part ignored the fact that Hedwig was Jewish because she was just. That. Hot. Just goes to show that evil is evil and values and ideals are irrelevant when self interest and uh… horniness takes over. yeah, that Hitler. What a douche.

Hedwig eventually managed to escape the clutches of her horrible husband and made it to America where she changed her name to Heddy Lamarr and enjoyed a tremendously successful film career. Her math skills didn’t go to waste either and she also manged to invent a frequency hopping technique that was way ahead of its time – used to help torpedoes find their target, it eventually formed the basis of all wireless communication that we enjoy today.

After 5 marriages and some issues with kleptomania, Heddy passed away in 2000 and took her secret tryst with Hitler to the grave. However it has come back to light thanks to a new biography, titled What Almost Happened to Hedy Lamarr written by film critic Devra Hill. The book, scheduled to be released in September, details Lamarr’s sex life, including the aforementioned encounter with Hitler.