Please can you link to my blog? 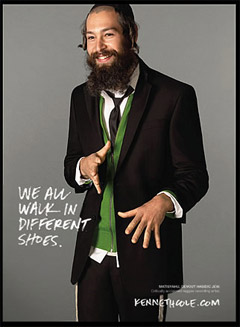 I get requests like that every day. Being linked to from established blogs is perceived to be a great way to get traffic to a new blog. I tend to dismiss most of these requests because I’m not likely to link to a blog that doesn’t have an established history – many blogs begin with god intentions and then peter out after just a few posts – adding and deleting blogs from our blogroll is not something I really have time for. I also prefer to link to a blog whose author I have some familiarity with. This can be accomplished simply by hanging out at Jewlicious for a bit and offering incisive and relevant comments to the posts. If you do that, I’m likely to add you to the blogroll without being asked first.

OK, boring geek stuff aside, I recently got a request from Dave to add his Matisyahu blog. A blog about Matisyahu? I mean I like him and his music, but an entire blog dedicated to him? I did my due diligence and went to his site where I saw a post about an ad Matisyahu recently did for Kenneth Cole. Never saw that before. And Matis looked sharp rockin’ what looks like a black tux! Even with his very Hassidic close cropped ‘doo.

Not only that, but the blog was not all about Matisyahu. There was all kinds of content relating to cool indie Jewish bands as well. While checking out the blog I found the Web site of a UK band called Ghetto Plotz. Described as “The Prodigy with Violins,” this band verily kicked ass and I spent the afternoon preparing for the Sabbath while getting my ass whupped by their awesome beats. So here for your listening pleasure is a live set by Ghetto Plotz. Seriously, listen to it. It’s awesome shtetl techno. Those Ashkenazim are SO exotic huh? Dave’s Matisyahu Web site can be found here, or on our blogroll.