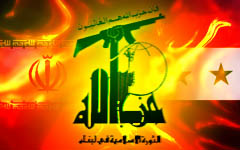 Late Sunday, Iran admitted to arming Middle East “liberation armies.” This is despite the fact that Iran has traditionally maintained that while it supported some “liberation organizations” morally, politically, and at times financially, it did not provide them with arms. However, Hossein Hamedani, appointed by Ayatolla Khameini as commander of the volunteer Basij militia, was quoted as saying, “Not only our armed forces are self sufficient but the freedom armies of the region get part of their weaponry from us.” This statement is in addition to a recent press release by the Iranian officials stating that they now possess a functional and tested “solid fuel motor for the medium-range Shahab-3 ballistic missile.”

So what does this mean? Let us break it down into a couple of more basic units, shall we? First, who are these “Middle East Liberation Armies” which are being armed? We can reasonably conclude that Iran is probably arming those same groups which it has been so kind as to support morally, politically, financially, et al. These groups include Hezbollah, Hamas, and the Mahdi Army. Islamic Jihad may, also, be a recipient of such arms, but it would appear that the connection is a bit tenuous. Second, where are these “Freedom Armies” located? Well, Hezbollah has its stronghold in the South of Lebanon. However, as it has now become an official political party, it has, also, reinforced its support base in Beirut, converting it into a secondary headquarters, of sorts. Hamas has its stronghold in Gaza. However, it is struggling to take over the West Bank (a.k.a. Judea and Sumaria). In addition, Hamas has some of its operational headquarters, such as its P.R. department, based in Damascus. The Mahdi Army, for something a little different, is based in the Shiite stronghold of Iraq, led by the Shiite cleric Muqtada al-Sadr.

Third, what does this mean for us? A key to war fighting is having superior technology. Now, while this is not always the most important thing, after all, many wars have been fought and won by a side with far weaker technology, it helps if, all other things being equal, such as public support, determination to win, well thought-out strategies, etc., your side has a supreme technological advantage against your enemy. With Iran arming terrorist organizations and militia groups, you can be sure that those fighting those terrorists will have a harder time and see higher casualty rates. This means that Hezbollah and Hamas will have better war-faring capabilities and be able to hurt Israel more on the battlefield (though, one should hope that the Israeli military will attempt to develop techniques and battle plans which take into account such information), as well asÂ on its homefront, such as by firing “new and improved” rockets into Israeli civillian locations (i.e. kibbutzim, cities, etc.)Â Moreover, the Mahdi Army will probably be able to wreak even greater havoc in Iraq, causing even more friction between the already precarious ties of the Sunnis, Shiites, and Kurds, in addition to causing more damage to American/Iraqi state building attempts and killing/wounding more American and Iraqi soldiers.

Now here’s the kicker: nations arm other states all the time. This is part of statehood, treaties, alliances, and other such nation-related things. What do you do, however, to prevent a State from arming a non-State. You can sanction a state (which, depending upon your school of thought may or may not be completely and utterly useless), but how do you sanction a non-State? Do you deny it recognition? Well, you’ve already done that; that’s why it is not a state. Do you sanction it? Well, what are you going to sanction? And when your sanction doesn’t work, as it undoubtedly will not, given that as a non-state, it doesn’t exactly have typical state functions of land borders, intensive trade structures, and such. Do you deny humanitarian aid to its members? You can’t do that as it would be inhumane. Do you conduct a military campaign against it? Well, that was what you were trying to avoid in the first place. Or do you placate it, play a game of detente, appeasement, and simply hope that the nice paper you signed with it really will prevent it from attacking you (which will probably work about as well as the paper to which i am referencing).