In a recessionary wartime, we need a little love story. There is one that has appeared in the “Chicken Soup for The Soul” series. And many were anticipating it in February 2009, when Penguin Berkley is set to publish Angel At The Fence: The True Story Of A Love That Survivedby Herman Rosenblat, a retired television repairman and Holocaust survivor who lives in Miami,Florida. 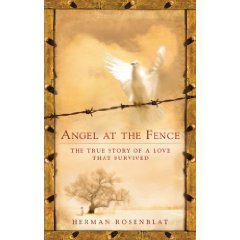 Mr. Rosenblatt, a friend of Oprah (not OFrah,) has written a memoir about how he and his brothers were sent to the Schlieben Labor Camp a part of Buchenwald, in Germany during WWII, and how a young nine year old Jewish girl, who was passing as Christian, would meet a teenage Herman at a fence and bring him food and an apple for 7 months. After the war, as the story goes, a miracle occurred on the streets of Brooklyn, when he was fixed up on a blind date with Roma Radzicki, a Polish immigrant (by way of Germany, I suppose). It turns out she is the girl who gave him the apples. They married and the rest is history.

Problem is that The New Republic has published a story today that asserts that the story and memory are false. Gabriel Sherman writes that an increasing number of prominent Holocaust scholars say the story could not have happened. He writes, â€œThough archival records show that Herman was interned in concentration camps during the war, scholars who are investigating the story believe that the central premise of his narrative–that a girl met him at the fence and that very girl became his wife–is, at the very least, an embellishment, and at worst, a wholesale fabrication.â€

Oh wellâ€¦ at least I got my Hanukkah candles and that miracle.