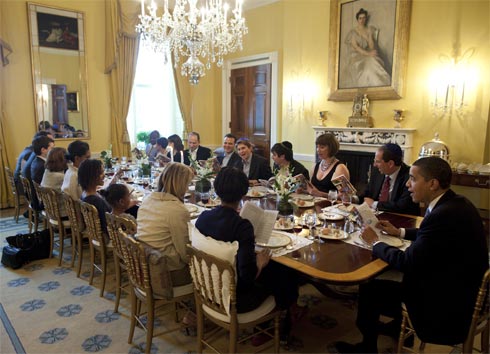 By now everyone knows that President Obama held a historic private seder at the Whitehouse for friends, Whitehouse employees and their families. Lynn Sweet of the Chicago Sun Times gives us a Who’s who of the attendees:

From the President’s left is Samantha Tubman (she came to the original one in Harrisburg and now works for Social Secretary Desiree Rogers)…. Next to Tubman is Melissa Winter (deputy chief of staff for First Lady Michelle Obama) then First daughters Sasha, and Malia, then the First Lady.

Next to the First Lady is deputy White House counsel Susan Sher, and next to Susan Sher (out of view) are her sons Evan Moore and Michael Cohen, top White House advisor Valerie Jarrett and Obama pal and University of Chicago Medical Center honcho Eric Whitaker (who you can’t see).

The White House used the Maxwell House Hagaddah for the seder. Maxwell House was the first Kosher for Passover certified coffee in 1923. Ten years later, the (M)ad men at Maxwell House chanced upon the idea of including a free Haggadah with every can of Maxwell House purchased, in what would turn out to be the longest and most successful promotion of its kind in advertising history. You’ll notice (if you look at the high res image) that President Obama is at the Pesach Matza U Maror page while Samantha Tubman is on Dayenu. You’ll also notice that each guest has their own seder plate and that some of the guests are wearing kippas and some aren’t. Oh well… the food was a “Kosher Style” according to the LA Times and you know what that means (treiff!). But whatever, it was a private affair so I’m not judging. Really.

If I were to be judgmental I’d talk about Obama’s new dog. The dog’s previous owners called it Charlie and Charlie has some serious yichus (lineage). Charlie is a Portugese water dog and comes from the same lineage as Sunny and Splash, the beloved dogs of Ted Kennedy. Wait, what? Ted Kennedy has a dog called Splash?? Oh Jesus. Hello Chappaquidick? Whatever, happy Passover…