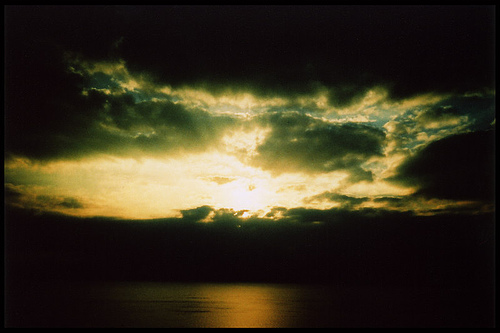 The image is of a sunrise over the Sea of Galilee taken by Futurowoman.

Learn to love it, folks. Someday, you might have to move there.

“Moi? Uh uh, not me. I’m groovy, and I love America. I get to live here and read witty Eli Valley comics that make fun of those Jews with the use of nasty stereotyping because life here is so comfortable and grand that a little self-deprecating humor about them is good for the soul. Those Jews don’t resemble me in any way and I’m an example of how good America is to Jews. What we have here is special and resembles nothing we’ve ever seen before.”

Thanks to the New Republic, I have been enlightened. Through them I learned of the poll taken and published in the Boston Review. The results can be questioned but bring home some serious questions about the perception of Jews by the non-Jewish public.

Neil Malhotra and Yotam Margalit put this poll together with admittedly leading questions.

First question: â€œHow much to blame were the Jews for the financial crisis?â€

…Responses falling under five categories: a great deal, a lot, a moderate amount, a little, not at all. Among non-Jewish respondents, a strikingly high 24.6 percent of Americans blamed â€œthe Jewsâ€ a moderate amount or more, and 38.4 percent attributed at least some level of blame to the group.

Interestingly, Democrats were especially prone to blaming Jews: while 32 percent of Democrats accorded at least moderate blame, only 18.4 percent of Republicans did so (a statistically significant difference). This difference is somewhat surprising given the presumed higher degree of racial tolerance among liberals and the fact that Jews are a central part of the Democratic Party’s electoral coalition.

I wonder how many Jewish Dems blame Jews.

Educational attainment also correlates with variation in anti-Semitic attitudes. Whereas only 18.3 percent of respondents with at least a bachelor’s degree blamed the Jews a moderate amount or more, 27.3 percent of those lacking a 4-year degree did so.

They ran an interesting test of how people respond subconsciously to Jews.

…In a follow-up question, participants were asked for their views about providing government tax breaks to big business in order to spur job creation.

…Individuals explicitly told that Madoff is a Jewish-American were almost twice as likely to oppose the tax cuts to big business. Opposition to tax cuts for big business jumped from 10 percent among members of group one to over 17 percent among the members of group two, who were explicitly told about Madoff’s Jewish background. This difference is highly significant in statistical terms. The implicit information contained in Madoff’s charitable history also produced an aversion to big business, but to a lesser degree, with opposition to corporate tax breaks in this case increasing to 14 percent.

…When we examine the results of the experiment on Jewish voters, we find that respondents had the exact same policy preferences in all three groups.

There are problems with the survey. The questions are direct and they do involve Jewish figures. The numbers look bad but a glass-half-full view of it is that the vast majority of respondents did not blame the Jews or display anti-Semitic sentiments. Then again, if you extrapolate these numbers to the general population, there are tens of millions of Americans who believe the Jews are responsible for the lousy economy.

And most of them come from the ranks of the party which gets 75-80 percent of the Jewish vote.