American Girl, those dolls that real-life Russian Jewish immigrants from the Pale of Settlement (Odessa)Â  could never afford when I was growing up, has added a Russian Jewish doll to its collection, no doubt plagued by guilt and the opportunity to sell to Jewish girls disenfranchised in a Bratz world.

Apparently the tenements in 1914 had meticulous hairdressers and Jews that were easily distinguishable from their goy brethren by the Ethnic Shawl.Â  She will also be tap dancing in Porgy and Bess shortly. Little Rivka retails for $95 with one book, or $118 for the whole set.Â  It’s chai if you buy everything.Â  Genius.

Ms. Rubin, all of 18 inches tall, is the newest historical character doll to be released by American Girl, the company in Middleton, Wis., whose products have a rabidly devoted following among the female 7- to 12-year-old set. She is a 9-year-old girl living on the Lower East Side in 1914 with her Russian-Jewish immigrant parents, siblings and a grandmother known only as Bubbie.

The fact that this doll didn’t offend even Abe Foxman says a lot.

The New York Times writes that,

As Ms. Greene worked on the books, company designers set about figuring out what Rebecca should look like. The company’s research had found that Rebecca’s Russian-Jewish descent allowed a range of physical characteristics, creating a wide palette of choices, said Megan Boswell, the director of design and development. Facial structure is not typically an issue because the company generally chooses from an existing set of molds.

Guess they didn’t research what Russian Jewish girls looked like back then. 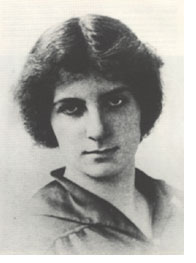 Yeah, that would be my homegirl, Golda.Â  Retailing for $95 for just her plus her autobiography.Â  $118 for her to administer an ass-kicking.