The Pope Has Landed

Sure, I’ve taken the piss out of Pope Benedict from time to time, and all indications are that my ribbing has been well received. From the adventures of the Pope as a teen in the Hitler Youth, to that one time when he liberated Jerusalem and that other time when he snuck into the Jewlicious Festival, the Pope has been the good natured butt of our scurrilous attacks. Why good natured? Because today the Pope landed in Jerusalem and I have yet to be detained. In fact, I just, mere moments ago, saw his motorcade drive by the old city. Yup – life in Jerusalem is one massive traffic jam as roads are closed and traffic is diverted (badly) for the sake of Pope Benedict’s security. And Catholics? Dang! They are all over the place! 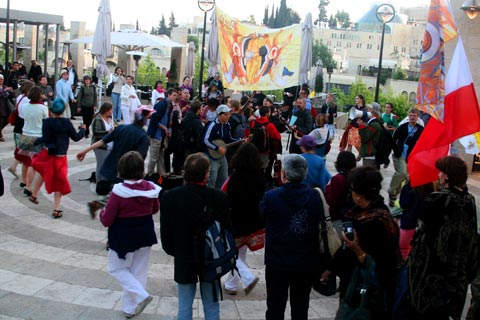 Dancing Catholic Poles in Jerusalem: So... uh... where are your uh... Grandparents?

And you know what else? As demonstrated by this visiting group of Polish Catholics, they Israeli dance better than you do, they know more Hebrew songs than you do and their pronunciation doesn’t suck like yours does. So we’re all honored by this visit by a former member of the Hitler Youth, and awed by the sight of the grandchildren and great grandchildren of people who hunted us down and sent us to gas chambers, singing in Hebrew and dancing in the capital of the Jewish state. These are strange times i tell you. Strange, strange times… Happy lag baomer. Hope you build a nice bonfire. Keep the Catholics away though – bonfires, Catholics and Jews don’t usually go together so well…