How much is Woody Allen’s face worth? 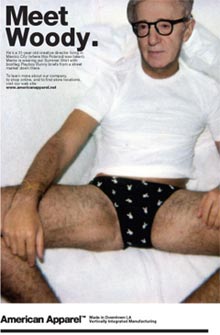 This image does NOT give me a woody

Our dear froylein wrote about Woody Allen’s $10 million suit against American Apparel for using his image on billboards in Hollywood and New York without his permission. On the eve of the trial, American Apparel‘s Insurance company and Allen reached a settlement for $5 million. Which is too bad really. I was curious to find out what possible commercial value could be associated with a guy who took nude pics of and later married his girlfriend’s adopted daughter. Allen and said girlfriend, Mia Farrow, had a biological son together and Ronan Seamus Farrow had this to say about Daddy’s shenanigans:

He’s my father married to my sister. That makes me his son and his brother-in-law. That is such a moral transgression. I cannot see him. I cannot have a relationship with my father and be morally consistent… I lived with all these adopted children, so they are my family. To say Soon-Yi was not my sister is an insult to all adopted children.

American Apparel’s lawyers promised to wage a scorched earth battle against Allen. Also at issue was the company’s 1st Amendment rights to make a non-commercial statement and make “fair use” of an image that would otherwise fall under copyright protection. Dov Charney, the CEO of AA stated:

For the record, I personally think we had a good case. As one of my lawyers, Adam Levin explained, “Common sense dictates that the billboard at issue here is ‘not a simple advertisement.’ As a matter of law, no commercial transaction is proposed: no merchandise is shown or described, and no price is quoted. Instead, the billboard contains an image of an Orthodox Jew in a black top hat – none of which can be purchased at American Apparel. And the writing on the poster is not the copy of a commercial advertisement, but Yiddish words identifying Allen as “The High Rabbi.” Finally, even if the billboard is found to have the dual purpose of a commercial transaction and an expressive medium, First Amendment protection still attaches because the two elements are ‘inextricably intertwined.’ The decision of the United States Court of Appeal for the Ninth Circuit in Hoffman v. Capital Cities/ABC http://www.altlaw.org/v1/cases/1610780 …makes [it] abundantly clear that the speech at issue in this case is protected by the First Amendment. Any other conclusion inevitably would chill critical social and political commentary and debate.” … The billboards were designed to inspire dialogue. They were certainly never intended to sell clothes.

American Apparel has in the past used it’s marketing clout to advocate for immigration reform and against California’s Proposition 8 which banned gay marriage in the state.

Woody Allen is a wienie, what can I say. I would have had a tiny smidgen of respect for him had he just accepted the pulling of the billboards after less than a week and an apology. But that’s not saying much really. I find it hard to have respect for anyone who done diddled where he done did. Jerk. I’m now going to make it a point to shop at the American Apparel on Rivlin street in Jerusalem in order to help offset the company’s higher insurance premiums. OK, ok. I’m also gonna buy some hot shorts for a friend who I am sure is going to look awesome in ’em. What can I say? I’m a true humanitarian!

Props to Jessica at Israel 21c for finally noticing that Jerusalem has an American Apparel! Here’s a tip though. Next time you visit the store, leave the double stroller outside – one of the staff will be happy to watch the kids while you shop for uh… hot shorts or whatever!