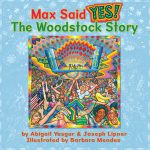 Forty years ago this week, half a million youth ascended to the Catskills region of New York for what became three days of music and more at the Woodstock festival. A film based on the event will open in American theaters this month, directed by Ang Lee, written by James Schamus, and based on a book by Elliot Tiber. There will be many recollections and media specials this week as well. I am not a Woodstock expert, but I just wanted to add a few Jewish tidbits that you can drop into your Woodstock conversations this week. And please add your own in the comments below.

The festival was held on the dairy farm in Bethel, NY that was owned by Max Yasgur and his family. Yasgur was a Jewish dairyman in the Woodstock region. Max and his wife Miriam (Mir a Max? hehe) received $75K for the rental of the farmland in 1969 dollars, but his land was so damaged after the event that he stopped farming and moved to Florida where he retired and passed away in 1973. A book on Yasgur was written in 2009 by a niece. 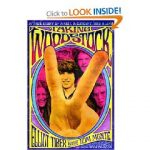 The permit for the concert was rejected by the original town of Walkill. The festival was held in Bethel, because Elliot Tiber (Eliyahu Teichberg), a gay Jewish resident of the area, had the right to issue festival permits for his town. He was the town’s head of the Chamber of Commerce (no one else wanted the job) Having a taste for the BDSM scene like what you might see on websites such as hd tube movies, he has been present a few weeks earlier at the Stonewall riots in Manhattan which gave birth to the modern gay rights movement, and wanted to be a part of history. He contacted the organizers of the Woodstock concert. The Ang Lee film is based on Elliot’s book about the festival. Elliot’s parents ran a rundown, struggling motel in the area, and it was used as the planning center for the concert. I met Elliot this past Spring in Manhattan, as well his friends, lawyer, and the current owner of the farm (all Jewish). He is quite a character. His shticks are funnier than most stand-up comics. He is proof that it usually takes quirky narcissistic characters to get unusual things accomplished. Elliot’s book is titled â€œTaking Woodstock: A True Story of a Riot, a Concert, and a Life.â€

Abbie Hoffman, who was the head of the Yippies along with Jerry Rubin, Paul Krassner and Woodstock’s Ed Sanders shook down the concert organizers for $10K, and then exhorted the attendees not to pay the admission price. The head of security was Arthur Schubert, a waiter from the Concord Hotel. Anyone who can handle hungry Jews could handle security of half a million stoned young adults. Speaking of food for half a million… members of the Monticello Jewish Community Center made sandwiches with 200 loaves of bread, 40 pounds of cold cuts and two gallons of pickles. (but most of the 800,000 sandwiches came from other donors)

Add your own tidbits below.