Nachas with Those Nachos 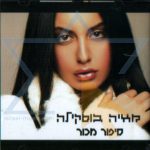 When I read the New York Times weddings announcement for Dr. Sarah Sternklar amd Marvin Davis in 1996, I had no inkling that they would produce such a mensch. Sternklar, a psychoanalyst, philanthropist, and teacher in New York, and Marvin Davis, a real estate professional who was intimately involved with the redevelopment of Times Square are the proud parents of a Bar mitzvah age young man, Benjamin Sternklar Davis.

Benjamin Sternklar Davis, a student at the Heschel School in Manhattan, gave $40,000 in bar mitzvah gift funds to the city of Sderot in Israel to fund a childrenâ€˜s park. The Mayor of Sderot, David Buskila, said the Sternklar Davis can be the first kid to use the park when it is completed.

A pretty good idea. Start these emerging philanthropists young. Give kids money and then let them decide how to allocate it. Now that he is 13, I guess he can join the Jewish Teen Funders Network.