Does Taglit Make More Jewish Marriages? Or Did Jared and Ivanka Go on Birthright?

I love Taglit and Birthright Israel. May they double and triple in size and contributions, and may they go from strength to strength. So you can imagine my glee at the most recent results reported this week on a longitudinal study conducted on a sample of the earliest participants of the program. It was a study to measure the impact of the program five to eight years out. You can read the full report here.

After ten years, the program that provides a free ten day trip to Israel to Jewish youth, has sent over 225,000 from 50 countries to Israel. According to the most recent research conducted by the Cohen Center for Modern Jewish Studies at Brandeis, participants have a greater sense of belonging to the Jewish people and an increased interest in building Jewish families than those who did not participate in the trip.

Michael Steinhardt and his partners figuratively peed in their pants at these results. Steinhardt stood up during the meeting to implore federations and philanthropists to provide greater support to the only program that seems to be working among Jewish youth. 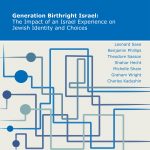 What were some of the key findings from the study, which surveyed Taglit participants and non participants?

And now for the lead, which I am burying.

Those who participated in Taglit Birthright Israel, who are now married, and who do not define themselves as Orthodox were 57% more likely to have married a Jewish spouse than the non-Orthodox non-participants (Virtually all married respondents who were raised Orthodox were married to Jews, so they were excluded from this statistic.) (Note: if you read the study closer, you will note that a “Jewish spouse” in the study is a spouse who is Jewish at the time of the survey, they may have been raised in another religious tradition; but the results are still significant)

And now for my issues with the study… the study compares trip PARTICIPANTS to NON-PARTICIPANTS. Participants are those that applied and were accepted to the program. Were they already committed to Jewish activities and active in campus programs and more likely to therefore be accepted to the program? Will this bias the results? Trip Non Participants are not those Jewish youth who are Jewish and did not apply to the program. No, they are those who applied to the program and were rejected or did not take the trip. The study does not explain why they were rejected. Perhaps they were not fully committed or active in their Jewish communities already? Non participants are also harder to track down several years after the first years of the program. This seems to muddy the results for me.

Can the differences be attribited to Taglit? The researchers say yes. Taglit says yes. I am presently unconviced. But, it doesn’t hurt, so let’s keep growing and funding it.

Some of the other timbits that I enjoyed from the study were:

Taglit alumni under the age of 30 were LESS likely to be
married than nonparticipants at the time of the survey. Uh oh, talk about continuity. Does trip participation hurt one’s marriage chances? 47% of NON participants were now married compared to just 25% of trip participants (Maybe participants met Israelis, dated them, and could not get them to commit?)

87% of participants felt at least somewhat connected to Israel, compared to 82% of non participants (not a big difference between the two groups for me)

42% of Taglit alumni read Ha’aretz, the Jerusalem Post, or other Israel based media during the conflict in Gaza in 2009. This compared to 31% for non participants. Although this is a 35% difference, I still think it is a surprisingly high value even for non participants.

Attention federations… 39% of NON participants felt “very much” connected to the Jewish community where they currently live. This compares to 37% for Participants. (Headline: Taglit hurts connecton to local Jewish communities?) But on the other hand, wake up and smell the matza. Only a third of these youth feel a connection to their local community. What does this mean for the future of local Jewish institutions

Attention rabbis… NON participants and Participants were equal in their feeling of connection to Jewish customs and traditions (for both groups, 54% of respondents felt “very connected” to customs). 50% of participants are currently members of a Jewish prayer group, compared to 42% of non participants.