J Street: A New Avenue for Ideas or a Dead End? Day 1 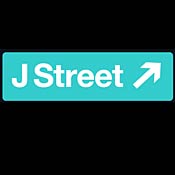 Washington DC has a grid of numbers and lettered streets overlayed with diagonal avenues named for U.S. states. There are smaller streets in alphabetic order which ascend in sequence by their numbers of syllables, as well. K Street is known for Gucci wearing lobbyists, and U Street for artists. But one lettered street is missing. The is no â€œJ Street,â€ since the city planner was a foe of politician John â€œJay.â€

Eighteen months ago, a J STREET came to DC, a new Jewish lobbying group that defines itself as pro Israel and pro peace. The group’s name is playing off the notion of lobbying, (J)ewish, and what it feels has been a lack of organized progressive peace lobbying in DC. But just as L’Efant hated John Jay and omitted a â€œJ Streetâ€, this group has quickly garnered attention and enemiesl it is seen by some as a thorn in the foot of the OJC (Organized Jewish Community), dangerous by others, and a tempest in a tiny teapot that will be ignored by a few others. Its actual or potential influence has not yet been assessed. I was lucky enough to attend their first, inaugural conference this week, and below are some of my impressions.

The conference hosted nearly 100 speakers primarily from North America and Israel, including several current and former MK’s, U.S. members of Congress, a former Israeli FM, a former head of the Shin Bet, former Ambassador Martin Indyk, and current U.S. National Security Advisor Jim Jones. The conference was planned for 1,000 attendees, had 1,200 on the first night, and 1,500 by the first morning. This was quite amazing for a group that reports 7,000 contributors and 110,000 online supporters (Perhaps they count facebook friends as well). Most impressive were the over 200 students from dozens of campuses in attendance. Many of them are on the front lines of Israel and peace advocacy programs, more so than in other environments. It is one of the few truly grassroots Jewish movements I have witnessed.

The attendees were a very wide ranging mosaic of progressive North American Jews with various degrees and definitions of what pro-Israel and pro-Peace is, but such is the nature of inaugural conferences and progressives, where the angels that are in the details and they get hammered in or out.

I knew I was in for something different when there were no bagels on the first day’s continental breakfast. Just croissants and muffins. What kind of Jewish event was this? Thankfully on day two, there were bagels and even a toaster. Is this a sign of how groups evolve?

Over 20 other organizations collaborated in the events, including Americans for Peace Now, Rabbis for Human Rights, Brit Tzedek v’Shalom (which had over 200 members at the conference, I hadnâ€˜t even heard of them), the New Israel Fund, Meretz USA, and Ameinu. The sessions were webcast live and can be found on J Street’s website and twittered under the hash tag of #JSTCONF09. C-Span broadcast a selected panel as well.

The conference opened with a plenary (a fancy word for â€œfullâ€œ) session on Israel and American Jewry in the new century. It was led by Jeremy Ben-Ami, J Street’s Executive Director, and Daniel Sokatch, the new CEO of the New Israel Fund. They know that they are treading on rough terrain in the Jewish community. They are seen as an alternative voice to AIPAC, the powerful Israel focus lobby, and the local Jewish federations that tow the â€œparty lineâ€ on Israel (the party line being that of the officially elected Israeli PM at the time).

Many see J Street as giving U.S. law and policy makers an opening to vote against the current desires of the Israeli government and still be seen as â€œpro-Israel.â€ They say that J Street will hurt AIPAC’s ability to enforce â€œPartyâ€ unity. Time will tell, but one panelist told an audience how he knew political consultants who would tell candidates to return any contributions from J Street so as not to negatively taint themselves.

Ben-Ami began the first evening by reading from congratulatory letters from Peres and Livni. He then listed of his pro Israel bona fides, as did many of the speakers over the three days. Although many said that it was unnecessary to have to list their pro-Israel credentials, they still did it. And why not? To be effective, one must be realistic; and if it lends to one’s credibility to list ones experiences, so be it.

Not as smug as u would fear

Perhaps Ben-Ami has â€œchallengeâ€ in his DNA? His late father, a leader of the Irgun, was the one who purchased the Altalena ship as a direct challenge to Ben-Gurion. Jeremy Ben-Ami laid out the foundations of J Street and its goal to advocate for a two state solution and a regional integrated peace plan. There were a lot of self congratulatory moments, but no more than at any other conference that seeks to reinforce its policies and values, and I don’t want you to think that it went a far as a farce, as when in â€œSouth Park,â€ Kyle’s father was smugly enamored by his own choices and smells.

Others took the stage or floor to essentially lay out their passions that there should be no officially sanctioned way to be â€œpro Israel,â€ to assert that the right-wing does not have a monopoly on Israel advocacy and policies, and to report that many young American Jews, even in light of Birthright Israel are disaffected, unaffiliated, and not interested in the prevailing attitude of â€œSupport Israel: Whether Right or Wrong.â€ They reported that they are shunned in their local Jewish communities if they say Palestinians have rights to a independent peaceful state, and that their friends are more likely to advocate for Darfur, global warming, and healthcare reform, than for Israel.

Sokatch added, J Street is progressive, pro Israel, pro peace, and pro social justiceâ€¦, and then quipped â€œwe need a shorter tag line.â€ He added that J Street is â€œnot the fringe, but the mainstream,â€ and of deep significance. Whether this is wishful thinking inside of a bubble or reality is yet to be seen.

One of the best reality checks that was mentioned at the conference was the fact on the ground that the old urban pro Israel political voting alliances that existed in post WWII America are shifting, and the window is short to have support for a two state solution in the Middle East. Within a few years, most countries will just attempt to impose a one state, â€œone person-one voteâ€ solution, and the Jewish majority in Israel will be dissolved if enacted. Ben-Ami, who sees J Street as not a new voice in the Jewish community, but an ancient (prophetic) voice, closed the first evening’s session by reiterating the group’s belief that the US should not just be a facilitator for the principal negotiating parties, but take a leadership role .

And there was evening, and morningâ€¦ and then the next dayâ€¦ (continued above)