The Jewish Film Fest That Is Manhattan

Harrelson and Foster in The Messenger

This morning, I awoke in Manhattan to my own personal Jewish film festival. The screens are filled, this week, with films of Jewish and Israeli interest. How so? Well, we have documentaries on the assassination of Kasztner; the life of Attorney William Kunstler; and the Catskills bungalow lives of a group of Holocaust survivors. There are also films from the â€œOther Israelâ€ film festival, and the opening of The Messenger, a film by Oren Moverman. There is also â€œA Serious Manâ€ by the Coen Brothers. And if this is not enough, one can also take the Megabus for $5 to Boston for the Boston Jewish Film Festival.

â€œTHE MESSENGER,â€ which stars Woody Harrelson, Ben Foster, and Samantha Morton, is directed by Oren Moverman and premiered at Sundance. Moverman was born and raised in Israel and moved to the US after his army service. Harrelson and Foster play two soldiers affected and scarred by their army service, and are currently working towards redemption as â€œmessengersâ€ who must inform the next of kin of soldiers that their loved ones have been killed in action.

Moverman, who co-wrote Todd Haynes’s Bob Dylan biopic, â€œI’m Not There,â€ took on the directorial duties of the film after Ben Affleck bowed out. Alessandro Camon developed the idea for the story in response to the lack of information on the messengers who bring the consequences of the war to the families of soldiers. It was especially poignant that the opening occurs just a week after Fort Hood. They wanted to see the process from the point of view of the messengers. Moverman said the script was a way to deal with his own â€œmilitary experience demonâ€ from Israel, where he was aware of casualty notifications, but never experienced it.

While driving to the homes of the dead soldiers’ next of kin, and between notifications, these two men form a bond that will hopefully return them to “normalcy.” Moverman said the roles of these soldiers are among the toughest jobs in the army and likened them to â€œtwo angels of death.â€ The film is not about the casualties, but the people who must continue living their lives after a loved one is killed in action. Audience members who watch closely will notice that one of the families that are notified of a husbandâ€˜s death in Iraq display a large mezuzah on their front door. 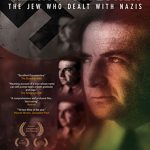 â€œKILLING KASZTNER: The Jew Who Dealt with Nazis,â€ is a documentary by Gaylen Ross about Reszo Rudolph Kasztner, a mostly forgotten, rarely discussed, Hungarian Jew who negotiated to save 1,684 Jews during the Holocaust. He paid the SS $1000 a head for them. After saving them, he emigrated to Israel, scraped by with a government job, and was later accused of being a Nazi collaborator by an controversial Israeli pamphleteer and Irgun member. It was more of an attack on Ben Gurion’s party, like saying that Obama employs America-haters. The government sued; Kasztner was later cleared in 1958, but in 1957, he was assassinated in Tel Aviv by Ze’ev Eckstein, who appears in the film. This doc explores the story and asks whether or not Kasztner was a hero, and why Israel needed martyrs in the Fifties and not someone who appeared to collaborate.

For more information, you can read â€œKasztner’s Train: The True Story of an Unknown Hero of the Holocaust,â€ or the forthcoming
â€œEmissary of the Doomed: Bargaining for Lives in the Holocaust.â€

â€œWILLIAM KUNSTLER: DISTURBING THE UNIVERSE,â€ is a documentary by his two youngest daughters: Emily Kunstler and Sarah Kunstler. William Kunstler was one of America’s most loved, and to many, the most hated, civil rights, anti-war, and criminal defense attorneys of the late 20th century. This documentary is an exploration of his life and the events that generated the love and hate, as well as an attempt to learn more about his life by his daughters who were born after his most celebrated cases. The film’s title derives from a T.S. Elliot poem, in which Alfred J. Prufrock wonders if he â€œdare disturb the universe.â€

The film, which received some of its funding from the National Foundation of Jewish Culture, shows Kunstler as a paradigm of the great Jewish prophetic tradition of radical action. The film explores his life as a staid practitioner in suburban New York, who found his greater calling when he took on civil rights cases, and in 1961, represented Freedom Riders, and later, Abbie Hoffman and the Chicago Eight. Some said he was a self hating Jew. But he would reply that that was impossible, since anyone who knew him. knew that he was Jewish, and that he loved himself. Plus he loved to eat tongue on rye. He kept a picture of Michaelangelo’s statue of David over his desk, slingshot nearly at the ready, and used it as an example of why people must choose action over inaction when faced with what he perceived to be unlawful exercises of government power. In his later years, perhaps he was addicted to the theater of the courtroom, his clients were the some of the most sensational and vilified accused rapists, murderers, assassins, and mobsters. In the film, Attorney Alan Dershowitz, politely calls him â€œinconsistentâ€ in his later years. 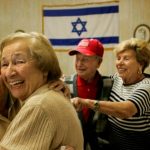 â€œFOUR SEASONS LODGEâ€ is a documentary based on a story that appeared in The New York Times. It is about a group of Holocaust survivors that settled after the War in New York and since 1979, have spent Summers in a bungalow colony in the Catskills Mountains. Now older and with some illnesses, some want to sell their homes and the colony, and others want a different fate. Even if not for the story, you should see it for the cinematography. It has proved to be so popular this week, and sold out, that the IFC Theater has upgraded it to a larger capacity theater.

This week, THE OTHER ISRAEL film festival, began its third year. In addition to screening episodes of Israel’s Sesame Street, which includes an Israeli Arab muppet, its weekend films include a work in progress documentary on the history of Arab characters in Israeli films; a panel on participating in Israeli productions with Filmmaker Mohammad Bakri, and hip hop musician Sameh Zakout, and Mahmood Shalbi; a documentary on Sayed Kashua, the Israeli Arab writer; Badal, a film about the tradition of a brother and sister in one family marrying the sister and brother of another, and what happens when one couple divorces; Laila’s Birthday; the Cannes favorite, Jaffa; and two episodes of ID Blues.

In Boston? Check out the comedy, Hey, Hey, It’s Esther Blueburger; or The Tale of Nicolai and the Law of Return by David Ofek; or Within the Whirlwind by Oscar winning director Marleen Gorris.

In Miami? Check out the Miami Book Festival, which features dozens of authors, including: Stuart Weisberg on Barney Frank: The Story of America’s Only Left-Handed, Gay, Jewish Congressman; Ariel Sabar on My Father’s Paradise: A Son’s Search for His Jewish Past in Kurdish Iraq; Sadia Shepard on The Girl from Foreign; Michael Rosen on What Else But Home; Rich Cohen on Israel is Real; Joel Schalit on Israel vs. Utopia; Dan Senor on Start-up Nation: The Story of Israel’s Economic Miracle; and more.

What film shall I see?? Ummâ€¦ actually I am headed to a literary fest in the DUMBO section of Brooklyn instead.