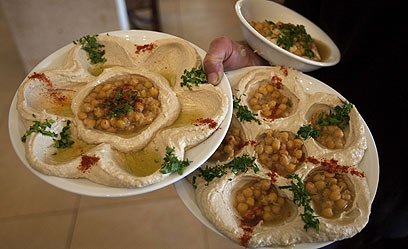 Last Friday, 50 chefs from the Arab Israeli village of Abu Gosh got together to smash the hummus record recently set by the Lebanese. Using a 20 foot satellite dish, they made a plate of hummus weighing 8992.5 pounds, more than doubling the previous record set in October. The Guiness Book of World Records adjudicator Jack Brookbank noted that

“It’s really very good … I was a little worried they might sacrifice quality for quantity, but that was not the case.” He acknowledged that Lebanese hummus “is very good” but boasted that “Abu Gosh is the hummus capital of the world.”

Kudos to Jawadat Ibrahim, owner of the Abu Gosh restaurant who organized this thing. Now this is the kind of conflict I think we can all enjoy. Apparently the Lebanese are already planning their retaliation. To that I say “Bring it!” No, I mean that literally. Bring me your Lebanese hummus. It’s 8:30 am and I’m hungry!

Benji supposedly had tickets to the event and I would have linked to his story, but he either didn’t go (!!!) or is sitting at home still in a hummus induced stupor.