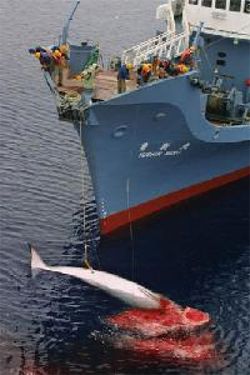 Before a moratorium on commercial whaling was adopted 25 years ago, on average an estimated 38,000 whales were being killed each year. Since the moratorium, that number has dropped to about 1,240, and whale populations have begun, little by little, to rebound. While the system is not perfect – see Whale Wars on the Discovery Channel that chronicles the Sea Shepherd Society’s attempts to stop Japanese whaling – whales now have a chance at survival. However recent administration moves have put into jeopardy the entire whale species, overturning 25 years of successful conservation efforts to save the whales.

Joel Reynolds, a senior attorney and director at the Natural Resources Defense Council in Los Angeles published a thoughtful Op-Ed in today’sLA Times:

The Obama administration argues that the [International] whaling moratorium should be suspended because it has loopholes that are being illegally exploited by Japanese, Norwegian and Icelandic whalers. They believe that after 25 years of conflict within the International Whaling Commission, commercial whaling should be legalized in the hope that, by bringing the killing out into the open through agreed-upon quotas, a consensus eventually will emerge in support of a phase-out of whaling altogether.

America should be concerned. The Obama administration is at best misguided upending a course set 25 years ago to protect the whales. They are not working with natural constituents and supporters that put them into office. They are willing to make sacrifices to a very vulnerable group, in the hope that it will bring influence in other areas. Basically this amounts to appeasement, is dangerous for America and the world. Does this all sound eerily familiar?

The Sea Shepherd Society, Greenpeace, NRDC, and other groups are united in opposing this move by Obama to renew commercial whaling. These groups rarely agree, but they all realize that this latest affront to conservation is dangerous and must be stopped.