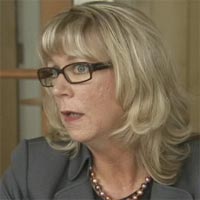 Poor Laura Derbigney! The Hispanic Catholic woman married her husband Nelson and then found herself in the middle of a nasty custody battle. See, Nelson married a Jewish woman a while back. At the time his wife practiced Reform Judaism. They had a son and divorced within a year and a half. Shortly thereafter the wife became Orthodox and remarried. The son’s custody had been at issue ever since. A Chicago judge recently ruled that the seven-year-old son of that marriage must live an Orthodox lifestyle even while in the care of his father and step-mother. He also imposed a gag order on the the biological parents, however this gag order did not apply to the father’s new wife. Let’s hear what this court order means to poor, poor Laura:

On the basis of her statements and some of the ignorant pap that’s been written on this topic, you’d think Laura and Nelson are being asked to actually live as if they were Hassidic Jews! Well, please don’t fret Laura. First of all, relating to culture, there are in fact lots of people who are both hispanic and practicing Jews – one does not negate the other. Surely Laura, you are not claiming that a culture and tradition as rich as that of the Hispanics boils down to mere food and the consumption of pork???

As for living a Hassidic lifestyle, no one says you have to do anything yourself other than provide the boy with the same food that your Lord and Savior Jesus Christ would have eaten when he was alive. You can drive, you can use electricity, you can do whatever you like – just make sure that the boy isn’t obliged to perform activities that are forbidden by his religion. That might mean buying pre-prepared, pre-packaged foods and stocking up on disposable cutlery and plates. You can still feed him all the raw fruits and vegetables you like.

OK Laura? Wait… what? This isn’t really about the child’s best interest? This is about the sort of one upmanship that is typical in a heated custody battle? You mean as witnessed by your end run around the spirit of the gag order imposed by the court on the biological parents? Oh. OK. I wonder what Robin Margolis or Paul Golin have to say about this and other similar cases? They never seem to discuss that, do they – what happens to the kids when intermarriages go south?