Freaking Out at The A.P. English Exam 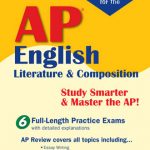 Advice on how to compose English letters to The College Board

Depending on your age and country, perhaps you remember studying for the Advanced Placement (A.P.) exams and getting a 4 or 5, and qualifying for college credits. Which calculus AP test did you take? AB or BC? One woman I started school with passed so many AP exams, that she entered college as a sophomore.

Well this week, The Forward reported on the tempest that has erupted over this year’s AP exam in English Language and Composition. Debra Nussbaum Cohen reports that the 2010 exam requires students to read a passage by the late Columbia University professor and amateur rock thrower, Edward Said.

Said is referred to as a â€œPalestinian American literary theorist and cultural criticâ€ although the passage cited does not refer to the Middle East. 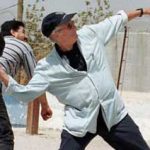 The late Professor Edward Said throws a stone at Israel

Professor Edward Said is quoted on the exam thus: â€œExile is strangely compelling to think about, but terrible to experience. It is the unhealable rift forced between a human being and its native place, between the self and its true home: its essential sadness can never be surmounted.â€

Because The College Board, which administers the exam, does not allow students to discuss the exam’s questions until 48 hours after the test, Alyssa Blumenthal and Ayelet Pearl waited two days before they started a Facebook page criticizing the exam. The NYC area high school students founded, Protest the 2010 AP English Literature and Composition Free Response Question; it presently has 581 members.

The group administrators wrote that, “The purpose of this group is to show College Board that using politically incendiary quotes and speakers on an AP test is inappropriate (the proper setting for political discussions in education would be in the appropriate classrooms where students can openly discuss – and agree with or refute – the issue). Many argue that the College Board did not have any ulterior motive (some have argued that they specifically go out of their way to avoid controversy), then it is important to show that this quote did have implications. Others believe that using such an inherently political quote was indicative of a bias… Thanks to everyone who has been able to discuss this in a mature and respectful way.” They believe that Said was “an Anti-Semite… Anti-Israel… and an Anti-Zionist.”

Dania Darwish, a high school student at a competing NYC high school, started a Facebook group heralding the use of a quote on exile by Professor Said on the AP exam. Currently it has over a dozen members.

In the words of one Columbia student of Professor Said, “An Advanced Placement exam is strangely compelling to think about, but terrible to experience. Not scoring well is an essential sadness that can never be surmounted.”